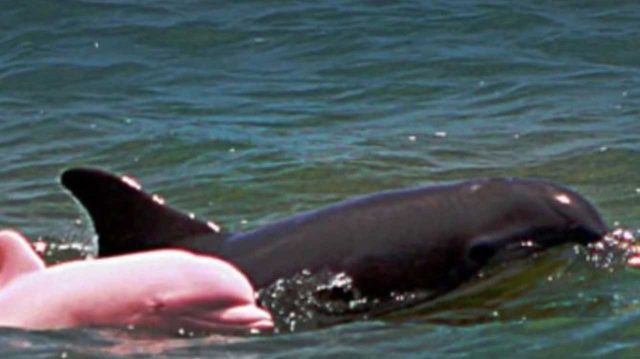 The rare, but famous bottlenose dolphin of Louisiana marked by a unique bubblegum-pink hue has surfaced again, and the news has taken the social media by storm. This special dolphin was first seen in the Calcasieu River way back in 2017 by Erik Rue, a charter boat captain.

According to Greg Barsh of Alabama’s HudsonAlpha Institute of Biotechnology, Pinky (the nickname of the pink dolphin) is most probably an albino. Here, it must be mentioned that at the institute Barsh conducts studies on the genetics of color variation.

The two most prominent signs of albinism showcased by Pinky are its reddish blood vessels and eyes; these signs show that the dolphin has pale skin that doesn’t have any pigment. Albinism takes place when cells responsible for producing melanin, the pigment which gives the eye, hair and skin their respective colors, fail to produce it in normal amounts. This mostly happens due to a mutation of a particular gene.

According to experts, it’s possible that Pinky’s parents were like any other regular dolphin, but each of them had one copy of the above-mentioned mutation in the same gene. The combination of those mutations gave the marine mammal such a distinctive color.

Scientists are saying that albinism can be accompanied by a range of health problems. Melanin offers protection against sunrays and also has a vital role to play in eyesight. Lack of melanin often makes albinos experience vision problems. Barsh said that due to these shortcomings albino animals are not spotted frequently in the wild. They are mostly spotted as pets or in laboratories

The other big news about Pinky right now is that she might be pregnant. Erik Rue, the first to spot Pinky, has said that he recently saw the rare dolphin mating. This revelation by Rue has lead to speculations that Pinky is a female dolphin and might be pregnant. However, the sex of the animal has still not been confirmed.

Whether the progeny of the pink dolphin, impending or not, will also carry similar physical traits is something only time will tell. However, scientists believe that there’s very slim chance of that happening. This is because for all their babies to be pink, Pinky’s mating partner will also have to be an albino.