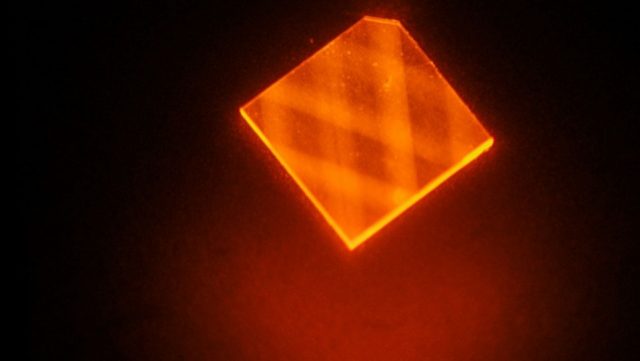 A group of scientists at the Massachusetts Institute of Technology (MIT) have developed a new magnetic field detector that is thousand times more powerful than all the models available currently. According to MIT, this innovation might result in the production of miniature battery-powered devices that can be used for contraband detection, medical imaging and even for geological explorations.

Devices that are used in the above-mentioned fields currently are equipped with gas-filled chambers; additionally, the majority of them are capable of working only in narrow frequency bands. The new detectors, on the other hand, are more powerful with synthetic diamonds carrying nitrogen vacancies (NVs) embedded in them; synthetic diamonds with NVs are known for being highly sensitive to magnetic fields. A diamond chip as big as a thumbnail can accommodate trillions of NVs. Each of these NVs is capable of measuring a magnetic field on its own. Earlier, scientists struggled to aggregate so many measurements. For determining all these measurements, scientists would need to zap the NVs using a laser beam; the intensity of this laser beam will reveal the actual magnetic state.

Dirk Englund, a member of the team of designers responsible for planning this new device, said earlier scientists used only a very small part of the pump light for exciting a small percentage of NVs. Englund and his team managed to change that.

A NV is a missing atom in a crystal’s lattice. The electrons in the NV can interact directly with magnetic fields; this property makes the NVs perfect tools for sensing. When an NV electron is hit by a photon, it (the electron) reaches a state of higher energy.

The team of designers responsible for designing this new magnetic field detector, made it clear that to make accurate measurements with the new device scientists will need to collect hundreds of thousands of photons, the more the better.

Another interesting revelation made by the scientists is that the NVs give the photons the ability to appear at as many as 4 different angles for being collected by a lens located right at the end of the crystal. This technique ensures that 20% of all photons will be able to focus onto the light detector.