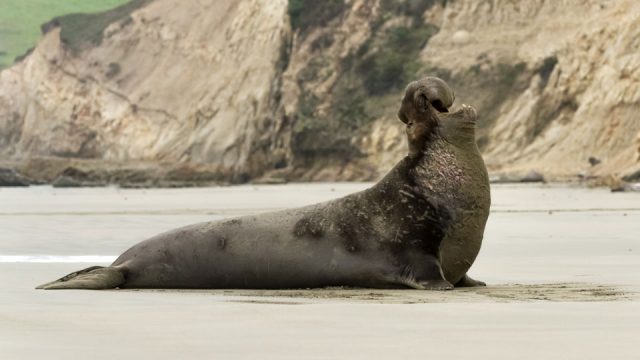 Elephant seal has always been a great subject of interest for the marine biologists.

A recent study says that these sea loving animals truly treat the sea as home and prefer to travel further than previous estimation when they are in the water.

During 1800s, the time was really rough for elephant seal and the population went down to just 30. Not once, they were announced extinct for thrice but managed to survive afterwards. Their struggle for existence achieved success for the first time to Año Nuevo Island in 1957.

A decade after, colonization of elephant seals started on mainland beaches. The first pup of the island was born in 1976 and since then Año Nuevo became their favorite breeding place.

Elephant seal are huge, almost 16 feet long and weigh up to 5,400 pounds. Males are extremely dominant by nature, and they don’t mind getting into a nasty duel for the sake of love. These males arrive in Año Nuevo during early December. They arrive first to establish certain rules, mainly to gain control over females all through the breeding season.

The females reach the island by mid- to late December. Some of these females are found pregnant from last mating season. After the birth of the pup, the mother turns very protective about it and for a month, the pup stays with mom. This period is particularly difficult for the new mother as she has to stay away from all the males eager to mate.

It is interesting to know that till these adult animals return to the sea in late winter, they don’t eat anything. But once they are in the sea, most of the males spend time in the feeding grounds of the northern Pacific, along the Aleutian Islands and Alaska whereas females prefer to be in northeast Pacific areas.

“We even had two of them crossing the International Date Line last year, and we’re not sure why. At that point, they were closer to Russia than the U.S.,” said Patrick Robinson, Año Nuevo UC Santa Cruz Natural Reserve director, reports Mercury News.

Eminent elephant seal scientist and biology professor from UC Santa Cruz, Dan Costa, with significant assistance from Robinson, took the tissue sample from elephant seal after weighing them. These samples will be analyzed to know more about the environment, health, and diet of elephant seal.

Also, scientists from the U.S. Office of Naval Research and Japan, with the help of monitoring devices and cameras have tracked elephant seals to understand what types of squid and fish are their favorite food.  From December to March, different tour programs stay on to view elephant seals while they are in their breeding season.

Apart from Año Nuevo, Point Reyes, San Simeon and near Hearst Castle are also some of the places these animals prefer to breed.

World Cup 2022 FAQ: Everything you need to know about tournament in Qatar –...