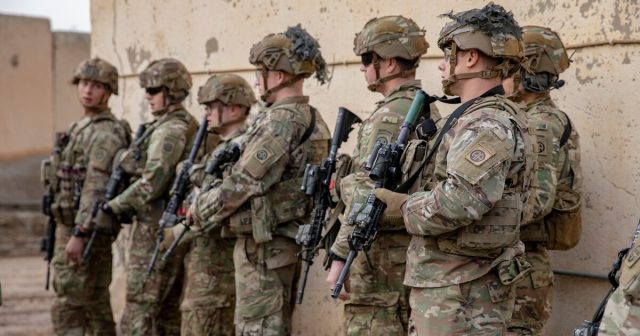 The United States has a massive and mighty army; it’s one of the country’s pride and joy, with an active military population of around 1.3 million personnel, with a further 865,000 in reserve ready to be called upon when required.

With an army that big and impressive, it allows for US generals and security leaders to deploy sizeable units in a variety of locations, meaning that the US can maintain a powerful and positive presence in many different locations, both domestically and internationally.

Here’s a look a where the majority of our overseas servicemen and women are currently occupied, as well as a brief introduction on why they’re there in the first place. Of course, the number of personnel in an area is fluid and can change over time drastically, which means that the numbers used in this article are rough estimates. However, they give a clear indication of where the majority of troupes are and provides insight into areas where the military feels need the most attention.

Thankfully, there are not many global conflicts going on at the moment that require too much attention from the United States Military. This means that the vast majority of troops are based domestically at home, on hand to provide humanitarian aid as well as other services. In fact, it’s expected that the army will play a big part in the eventual rollout of any COVID-19 vaccine within the country.

However, despite the increasing lack of needing troops overseas, there are still around 200,000 soldiers and other service people scattered around the globe, but where exactly are they? Read on to find out:

In the middle-east region, you will find the majority of US personnel still situated there in many varying Arab countries. Afghanistan is one of the more densely populated areas with US troops, with the current number of service people located within the sweltering region being around 12,000 to 13,000 troops.

They’re here because of the hangover from previous conflicts in the area, as US troops have been slowly and methodically reduced from the area as it begins to show signs of settling down. However, although the number now is significantly smaller than the 100,000 troops that occupied the region during the height of the conflict in 2010, the number has actually risen by a few thousand in recent years where soon to be dismissed (and perhaps even impeached) President Donald Trump added thousands more due to increased anxiety over the region.

There are currently plans to reduce these numbers further in the coming months and years, as a draft agreement with the Taliban – the region’s authoritarian rulers – planned to have troops reduced to 8,600. However, getting the number down to this figure is going to take a lot of time, as rather than conducting a formal withdraw, the force in Afghanistan is going to be reduced by merely not replacing troops as they finish their campaign and cycle out.

It’s also important to mention that plans change very quickly, as currently, Mr. Trump has halted peace talks with the nation, increasing tension, which could call for more troops returning. It all depends on the potential strategy deployed by President-Elect Joe Biden. To learn more about what Biden is expected to do regarding foreign affairs, perhaps this content by leading think tank on foreign policy might be useful.

With how much of a recent threat Syria and the insurgent within the nation has been, it might be surprising for people to learn that there are only around 200 troops in the country currently.

Syria has been a devastated country, destroyed and torn up by different groups and individuals, with the nation’s conflict causing a vast humanitarian crisis due to the increased number of refugees attempting to flee the nation into Europe, particularly Italy and Turkey.  At the height of the conflict, there were more than 2,000 troops in the nation fighting against Kurdish forces known as the Syrian Democratic Forces in Raqqa, the de facto capital of the region.

In recent years, forces have been pulled out from the region, and despite promises of being told that they can return home, many have now be stationed in neighboring countries and areas. The 200 or so people that remain in the land are situated at a small outpost in the South of the country, near the border to Jordan. They’re here to help combat Islamic State guerrilla fighters and are also there to block government forces and external Russian advisors from seizing several lucrative oil fields in the east of the country.

There are currently 6,000 service people within Iraq, which has been a hotspot for American military activity for just under two decades now. Back in 2003, the war that has been dubbed Operation Iraqi Freedom saw a peak of around 150,000 troops during the long conflict that lasted until 2011.

From here, the majority of troops left the region to go elsewhere, leaving a tiny portion of soldiers behind to instigate a handover process to the Iraq military to govern themselves. However, since 2014 where the Islamic State began to pour into the country from Syria and routed the Iraqi Army in Mosul and Baghdad’s outskirts, it became apparent that the American presence in the area had to grow. The majority of extra troops were relocated from Syria, and now the 6,000 strong servicepeople are now there, helping to hunt down terrorist targets and advise the fledgling Iraqi Army.

The vast majority of US troops within the Middle East currently occupy Persian Gulf nations and have done so as a response to Iranian attacks and provocation since May 2019. At any given time, there are around 45,000 to 65,000 men and women patrolling the area between Jordan, Oman, and Saudi Arabia. The forces located here are also pretty substantial in terms of firepower, as included alongside this number are airborne early warning aircraft, maritime patrol planes, missile defense batteries, B-52 bombers, armed Reaper drones, and a lot more, in an attempt to intimidate the Iranian nation.

The main thing that these people will be doing is operating airfields, running key headquarters, and piloting both warplanes and warships.

Africa has many US troops within it, spread out across the vast geographical area; however, the majority of troops are concentrated in the Sahel region as well as the horn of Africa. There are anything between 6,000 and 7,000 Army personal here, conducting many different tasks.

One critical activity is the 500 or so Special Operations troops fighting Qaeda-linked terrorist groups within Somalia, while in the Sahel, there are many hundreds of soldiers helping these nations to improve the infrastructure of their Army. Just last year, a colossal drone base was built near the city of Agadez, Niger.

It’s expected that as time goes on and that the US focuses more on proposed threats from Russia and China in the future, that more men and women will be recalled from Africa to concentrate their efforts elsewhere.

Rest Of The World:

In other areas of the world, there are still around 110,000 troops deployed in regions such as Europe and Asia. In Japan and South Korea, for example, there remain approximately 78,000 people here, helping to monitor the unpredictable threat of North Korea. They also conduct many training exercises here.

Then in Europe and other NATO nations, there are around 35,000 situated around the Baltic states and Poland to act as a deterrent from Russian aggression. There’s also a US presence in Turkey, where about 50 tactical nuclear weapons are stored, and there are also reports of around 250 counterterrorism troops in the Philippines as well as 2,000 Marines in Northern Australia to act as a response force for the Pacific region.

Common Areas To Check For Pests

Just how risky is equity? How much should you allocate to your portfolio?

Common Areas To Check For Pests

Just how risky is equity? How much should you allocate to...