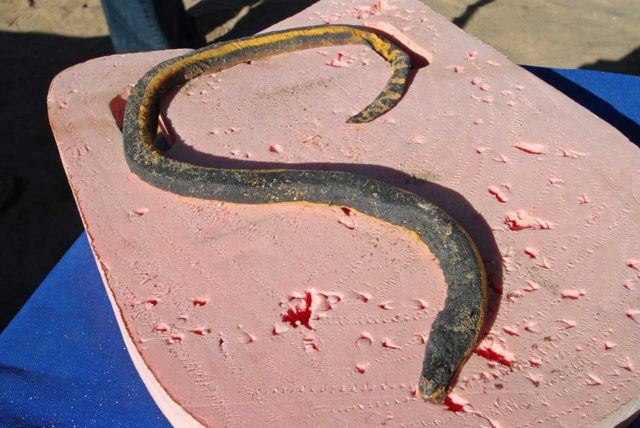 Beaches in California are currently undergoing a massive cleaning and this cleaning process has led to a scary discovery. An environmental group performing cleaning operations in the beaches of California has come across something absolutely startling when working on the Bolsa Chica State Beach; they have stumbled upon a venomous yellow-bellied sea snake.

The beach where the snake was found, i.e., the Bolsa Chica State Beach, is located around 30 miles towards the south of Los Angeles. The environmental group is making this scary discovery, on the other hand, is Surfrider Foundation. According to information provided by the group, this is the third time people have stumbled upon the poisonous snake in California. The first time such a snake was discovered was way back during the 1970s and the second time the reptile was spotted was earlier this year.

Experts representing the environmental group feel that the snake might have washed up on the beach as the temperature of the sea waters has increased due to a weather event called El Nino. The group informed that these snakes can swim both forward and backward and possess the ability of staying underwater for as many as three hours. According to the group, it’s widely believed that El Nino-related temperature change might have attracted the creature to swim towards the north in quest of eels and fish.’

Here, it must be mentioned that the snake was already dead when beachcombers representing the Surfrider Foundation discovered it.

The other most recent discovery of a snake of this species took place in California in the month of October. That time, the venomous creature was spotted in another beach in Southern California. The most prominent difference between the two discoveries is that the snake spotted in October was caught alive. However, it died shortly after being caught.

Greg Pauly, who works at the Natural History Museum, Los Angeles as the assistant curator of herpetology, informed that very rarely people get a lethal dose from the yellow-bellied sea snakes. This is because these creatures possess an excessively small mouth, which allows them to primarily prey on small fish and other tiny creatures. However, he did say that it is important that humans maintain a safe distance with these venomous reptiles.