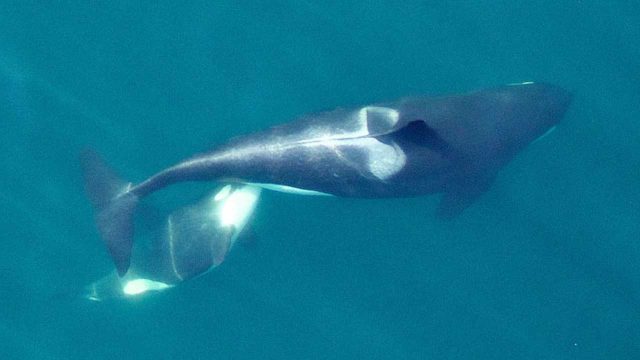 The National Oceanic and Atmospheric Administration (NOAA) has released several photos of a killer whale nursing her young in the San Juan Islands north of Seattle. The photos were taken with an unmanned aerial vehicle (UAV) that was scanning the area for whale activity.

The photos taken were that of a Southern Resident killer whale, and NOAA experts say it is the clearest and most detailed images taken yet of killer whales suckling its young in the region.

John Durban, a marine mammal biologist with NOAA Fisheries also disclosed the images were very stunning considering the fact that they were taken of a community of killer whales in the wild. He also noted that the images represent the first time that killer whales would be feeding their young without any disturbance.

Durban was part of the research team that deployed the UAV to man the area for whale activity, and he said previous photos of whales in the region had been made using helicopters from the air; but the images were not too sharp or so detailed as those taken by the UAV which was just 90 feet in the air above the whales so as not to disrupt them in any way.

Scientists deploy UAVs or other scanners to count the number of whales and their young ones in the region while also ensuring that they are in perfect health, and the mother can access enough food to feed its young while staying filled herself. NOAA officials say feeding a young whale takes a great toll on the resources of the mother.

The scientists use the white marks on the killer whales to identify them, and the particular whale with young has been marked as L94.