The moment this news broke, online discussion forums started getting flooded with comments wondering whether Pebble’s decision of using the Kickstarter’s official website as its online storefront is in the spirit of the crowdfunding platform. Nevertheless, Pebble has successfully sold over a million units of its smartwatch before Apple marketed its first ever wearable device the Apple Watch.

Eric Migicovsky, the chief executive officer of Pebble, the founder of Pebble Technology and a senior systems design engineer by profession, is the brain behind this newly released high-tech watch series. 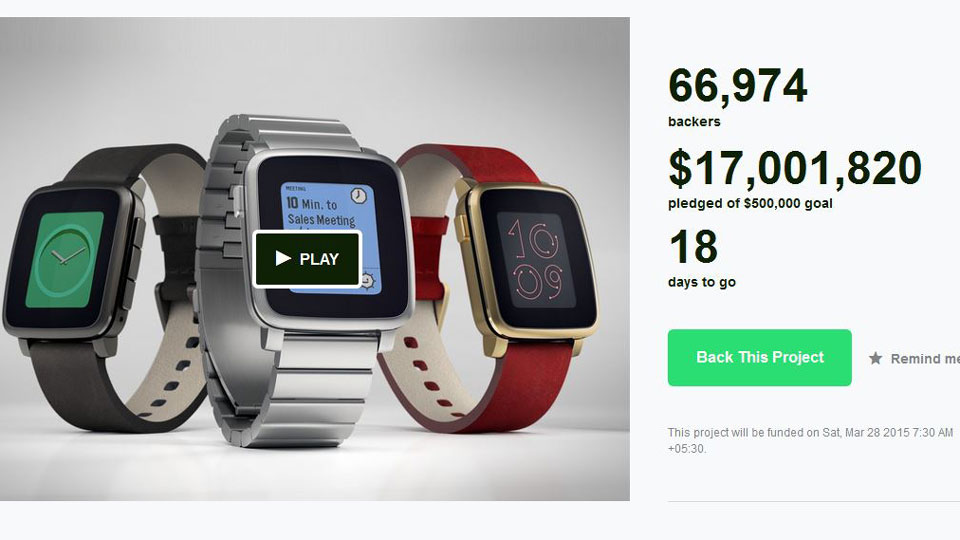 This is not Pebble’s first stint at Kickstarter. What’s more, it’s also not the first time Pebble has created fundraising records at Kickstarter. In 2012, the company accumulated over $10 million via the crowdfunding platform, and it was a record at that time.

In 2012, almost no one was aware of the term smartwatch, but what Pebble was offering was exactly that. What this means is that a couple of years back Pebble had no competitors to fight with. However, this time it has quite a few established names as its rivals; these include LG, Samsung, Sony and of course Apple. These companies not only have the best team, but also have enough capital for fueling their respective endeavors.

When asked about what makes Pebble Time special, Migicovsky said that today fashion holds extreme importance for the majority of the users. As a result, his company has made sure that Pebble Time has a fashionable exterior but has done so without compromising the device’s battery life.

So, how much does this new wearable from the house of Pebble Technology cost? The company has kept the starting price of the device only $199. A special version of the watch, which is a gold-colored Pebble Time Steel, will cost $250 on Kickstarter. It’s regular retail price, on the other hand, would be $299, which is still $50 less that the basic Apple watch with an aluminum body.

So, will Apple fall behind Pebble Technology as far as its smartwatch is concerned? Migicovsky said that people at Apple are completely aware of the company’s market and supply chain as a result there’s no reason to underestimate the Cupertino-based company’s power. Thus, Pebble is working to offer things that Apple cannot offer, for instance, 10 days of battery life.