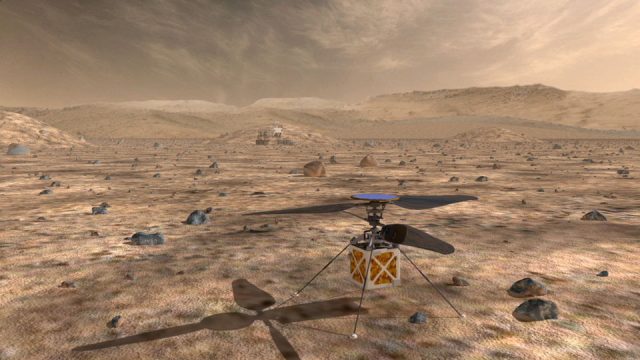 Mars exploration is likely to take a giant leap if this present project from NASA becomes successful.

Miniature yet self-sufficient helicopters are being manufactured with the aim of using them in order to receive data about the surface of Mars. These helicopter drones, equipped with powerful cameras would provide better details about the landscapes of the red planet; thus would enable scientists to point out the exact locations where the larger rover needs to be sent.

Around 2.2-lb. (1 kilogram) helicopter drones with the size of 3.6 feet (1.1 meters) are being made by the engineers from Jet Propulsion Laboratory (JPL), California. These drones will be working together with the giant robot designated for Mars mission.

But to make this helicopter a reality, significant challenges stay ahead. One of them being the fact that the atmosphere of Mars is 100 times less dense than Earth; therefore bigger blades will be required to keep the drones in workable condition. Another hurdle will be to make the helicopter stronger as the drone has to survive in the environment of Mars which is known to be extremely harsh. There is also need to make the vehicle lighter with faster speed.

Important features that are likely to be included in the drone are counter-rotating propellers, rechargeable batteries driven by solar power, high-resolution camera and a reliable communications system. To make the whole operation safe, the drones will be active only when the rover moves to a significant distance. They would fly around 330 feet (100 m) with the capacity of covering 2,000 feet (600 m) ground every day. Individual daily flights would last for up to 3 minutes. The images transmitted by the drones should be 10 times larger than those sent by Mars specific spacecrafts.

Scientists are using vacuum chambers that mimic the Martian conditions to test these drones.