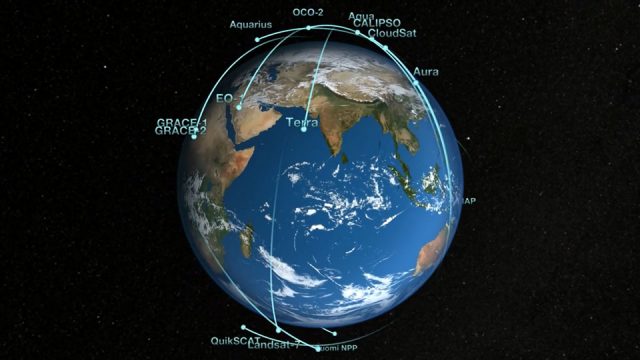 Watching the blue sky on a cloudless day is truly a great experience. However, if you are interested in science and the space as a whole looking at the sky with naked eyes is definitely not the right way of gauging the sky; this is because our bare eyes make us forget that the sky is filled with hundreds of satellites. NASA is aware of that and thus has released a video that will remind you how crowded the satellite space surrounding our planet is.

The said video has been created by the space agency’s Scientific Visualization Studio. It features a total of 19 satellites, each of which is used by NASA for monitoring conditions on planet Earth.

Out of these 19 satellites, four travel on the same orbit; they are Calipso, CloudSat, Aqua and Aura. They are satellites employed for monitoring the environment and are part of NASA’s “A-Train”. They hold a total of 15 instruments, all of which are used for studying aerosols and rainfall. They are categorized as A-Train satellites because they pass the equator every day at 1:30 pm; A, here, means “afternoon”.

The animation might make you feel that the area surrounding our planet is too crowded. However, the fact is that the region is even more crowded that what’s shown in the video. It’s showing only 19 NASA satellites. The actual number of satellites zipping around the planet is 1,235.