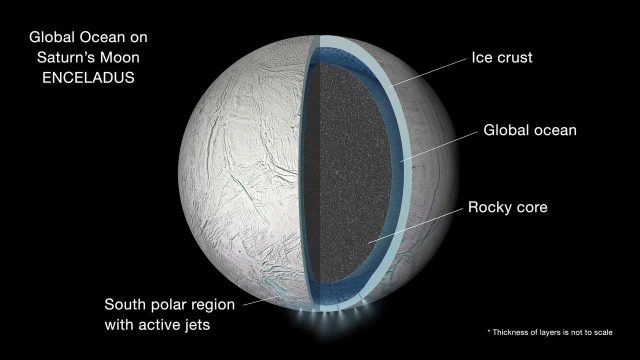 Enceladus, the third largest moon of the ringed planet Saturn, is home to a globe-spanning ocean; at least the researchers at NASA are claiming so.

Enceladus is a snowball of 300-miles and is known for spraying icy snots all over Saturn, its mother planet. The moon is doing so almost since the time the mankind has been observing its activities.

The southern polar region of Enceladus has a series of active geysers. According to data provided by NASA, the region is home to over hundred individual cryovolcanoes that keep on ejecting plumes of organic materials and water beyond the frozen surface of the moon.

NASA researchers analyzed data and photos gathered during a seven-year period and came to the conclusion that there’s a globe-spanning ocean beneath the moon’s frozen surface. They believe that the ocean acts as the source of the ice spurters emerging from Enceladus.

Using data gathered by NASA’s Cassini space probe, which is orbiting the ringed-planet since 2004, the space agency’s researchers have succeeded in indirectly determining what exactly lies underneath the surface of Enceladus; at least they are claiming so in the a recent study published in the popular journal Icarus.

Peter Thomas, who is a member of the imaging team at Cassini, said in a recent NASA blog post that it required several years of observations and thorough calculations involving different disciplines to come to the conclusion that there’s an ocean beneath the surface of Saturn’s third largest moon.

Researchers spotted a minor wobble in the orbit of Enceladus (scientists refer to this phenomenon as “libration”). This discovery allowed the researchers to conclude that far below the frozen crust of the moon, there’s a globe-spanning ocean which sits on a wobbly core.

Mathew Tiscareno, a participating scientist of Cassini and one of the paper’s coauthors, said that if the core and the surface of the moon were connected rigidly, the core would have provided enough dead weight to ensure that the wobble is much smaller than what was observed by the research team. He added that this makes the wobble a big enough proof of the fact that there’s a globe-spanning layer of liquid between the core of Enceladus and its surface.