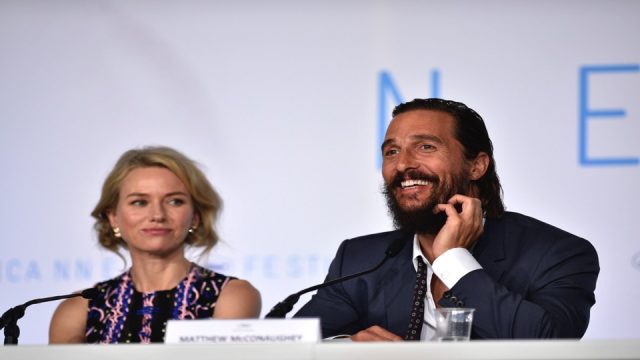 Naomi Watts and Matthew McConaughey walked the red carpet at Cannes Film Festival as they premiered their new movie, which the pair co-stars in. This was the 68th Cannes Film Festival and it was peppered with an A-list lineup of celebrities inside. However, Naomi Watts stole the show in many ways as she showed off an impressively well-cut dress that made most turn their heads. The dress was backless and looked like an aggressive choice for someone who otherwise makes safer choices with their wardrobe.

That being said, she knocked it out of the park. The dress came from the Armani Privé Spring collection and looked excellent on the 46-year-old Watts. McConaughey went with a more cautious wardrobe choice and fittingly received that type of reception. There wasn’t anything overly aggressive about what he wore, nor was there any major fanfare regarding his wardrobe choice. It wasn’t bad, it wasn’t great, it was just right. However, that wasn’t the big story regarding McConaughey at this event, as many were still talking about comments that he previously had made. The reception of the pairs movie hasn’t been that resounding. In fact, it’s been pretty bad. None was worse than immediately following the Cannes Film Festival when the crowd that was in attendance actually booed the movie. While many were quick to be critical of the audience, McConaughey had a very liberal approach to handling those critics and anyone else who felt as though the movie didn’t live up to expectation.

He said of his latest movie ‘The Sea of Trees’ that everyone has the right to boo him or his movies. In his mind, it’s all completely fair. At the end of the day, he went on to point out that he has too much to look forward to, to allow things like that to give him any displeasure. He’s happy and he’s in a good place, despite the failure that this movie seems to be. He said afterward when asked about the boos, “All right, all right, all right. Anyone has as much right to boo as they do to ovate.”

He closed by going a little more in-depth on the issue. He said, “I get to wake up next to someone who I know loves me the way she does – my wife – who gave birth to our three beautiful, healthy children. I get to live in a nice place, and I have things to look forward to every day – work, play, and sometimes nothing at all.” Clearly, he is in a good place, regardless of how this movie performs. He doesn’t need the success of this movie, and really, neither of the stars of this movie need it’s success. Rather, this is just one of the many projects either of them will take on that simply do not pan out the way they were originally intend.