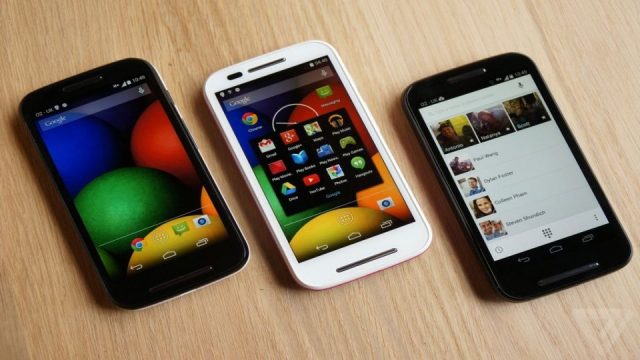 Motorola has unveiled their new entry-level Android device, which is a brand new Moto E. The company undoubtedly released this smartphone to tap into a market that remains relatively unspoken for. While there are a lot of companies out there that are producing mid-level and high-end devices, but really the market has been missing a high-quality, and truly entry-level smartphone. Enter the Motorola Moto E – the LTE enabled smartphone which will retail for under $150 off-contract.

From the design perspective though, this phone is actually pretty impressive. It only measures in at 4.5-inches, but in terms of how it looks and feels – it has a very industrial look, and feel, which play in favor of the device. The buttons, ports, and overall shape of the device will certainly not make anyone feel like they’re using an entry-level phone, but there will obviously be limitations. For example, the camera on the device is relatively unimpressive. A 5MP camera facing the back, and a VGA camera facing the front. The front-facing camera isn’t impressive by any means, but for an entry-level device that only costs $149 off-contract, and is cost-free on-contract. The Moto E runs a Qualcomm Snapdragon 410 processor that handles Android 5.0 Lollipop really well. Additionally, it boasts 1GB of RAM and 8GB of internal storage. A 2390mAh battery means that the device will handle the load that is put on the device by the processor that actually performs quite well, and will be a good entry-level device for anyone who isn’t looking for high-end specifications.

From top to bottom though, this isn’t a device that’s meant to have customers lining up at the door when it goes on sale at Verizon. While Motorola has begun selling the device online, on their website, they have not yet announced – nor has Verizon – when it will go live in their stores. That being said though, this device will perform really well when all is said and done. The budget-level processor that is inside the smartphone allows for great performance, and while some of the external pieces of technology included in the device won’t measure up to flagship devices – it does some of the important things very well.