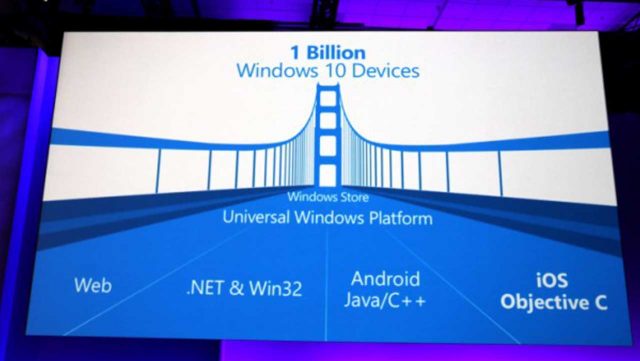 The plan which began as ‘Project Islandwood’ by Microsoft is finally going to be out in the open as the company releases an early look of the Windows Bridge for iOS. The bridge will be made available to the open-source community in its current state. Before its release later in the fall, Microsoft is accepting feedback and opinions with the participation on the code as they want to keep the development of the Bridge “in the open”. Some features are still in progress ad not ready yet and the company would like to elicit developers’ opinions and critics with regard to their requirements.

The American multinational released Windows 10 with a series of bridging technologies to enable app developers to bring their iOS, Android, web and desktop code to the Windows Store. Now, Microsoft is releasing the Bridge project for iOS under the MIT license. Contributors to the community are expected to help the company with source code, tests, bug reports, or comments.

The Windows Bridge for iOS is called WinObjC which provides Objective-C development environment for Visual Studio/Windows with additional support for iOS API compatibility. Its source code is available on GitHub. According to a blog on the Windows website, the Bridge supports both Windows 8.1 and Windows 10 apps built for x86 and x64 processor architectures. It also said that Microsoft will soon add compiler optimizations and support for ARM, which adds mobile support.

The new tooling capabilities will ship with Visual Studio 2015 Update. These will help developers to utilize the Bridge’s full capacity when the final version will release in the fall.

The technology giant had announced this open source porting tool for iOS to Windows apps at the Build-developers conference earlier this year but had kept them under wraps until now. It is a preview release for now, and the final version will be released in the fall. As for the Bridge for Android, it is currently under technical preview by invitation only and will release the public beta version of Windows Bridge for Android. The project called ‘Project Astoria’ will gradually expand the preview program by inviting more developers each week. They aim to have everyone on the early access waitlist by the end of August. In addition to this, the bridge for .NET and Win32- based apps under the name ‘Project Centennial’ will be ready for public testing next year.

This Android version of Windows Bridge is available only for apps on phones. However, developers of iOS apps will be able to cater to PCs, tablets along with phones. Microsoft highlighted that its “goal with the iOS bridge has never been simply to run iOS apps on Windows.”

Microsoft is encouraging everyone to point out missing and/or desired features via a ‘User Voice’ program. Hopefully, this transparent mode of development will make the platform a better place for developers to showcase their skills.