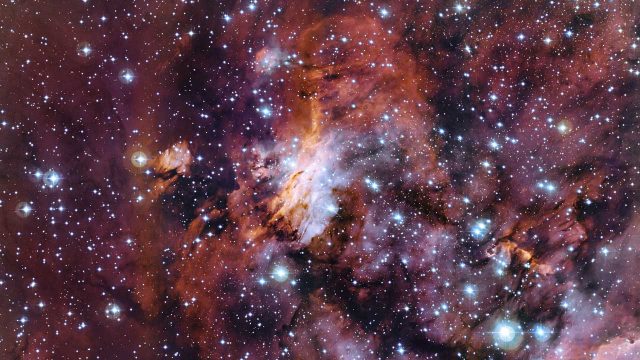 Prawn Nebula’s new view has allowed us to take a close look at cosmic recycling. In this recycling process, gas expelled from a previous stellar generation gets illuminated by glowing huddles of newborn stars.

The view has been captured by a 2.2 m telescope at Chile’s La Silla Observatory, a property of the European Southern Observatory (ESO). The telescope took pictures of the reddish nebula covered by newly formed blue stars.

The nebula, which is also often referred to as Gum 56 and IC 4628, cannot be seen clearly with the naked eye. It’s located nearly 250 light-years away from our planet, as a result of which it appears pretty faint when seen with naked eye. Scientists say that the light emitted by this nebula doesn’t have enough wavelengths for being visible to the human beings.

This invisibility of the nebula conceals a range of actions as new stars keep on forming from stellar nurseries in the debris and gas of the nebula.

According to ESO officials, the new stars are formed from the remains of some of the most gigantic stars belonging to a previous generation; the remains belong to stars whose lives have already ended and who have already ejected the material forming them in fierce supernova explosions. This ensures that the cycle of life and death continues for the stars. As the gas and dust becomes dense enough, a part of them collapses down to give birth to a new star.

The nebula gets its red glow from large clouds containing charged hydrogen. As the young stars start emitting ultraviolet energy, it strikes nearby hydrogen molecules and excites them. This in turn results in the release of light boasting the characteristic reddish tinge of hydrogen.

On the majority of the occasions, the source of such radiations is a pair of rare, blue-hued giant stars. These massive, powerful stars are known for having much shorter life spans compared to their smaller counterparts. According to experts, they live for around a million years before exploding and giving birth to a supernova.

In spite of being home to a pair of rare gigantic stars, the area was not explored as meticulously as it should have been. Before this, the only detailed image of the area was obtained in 2013.