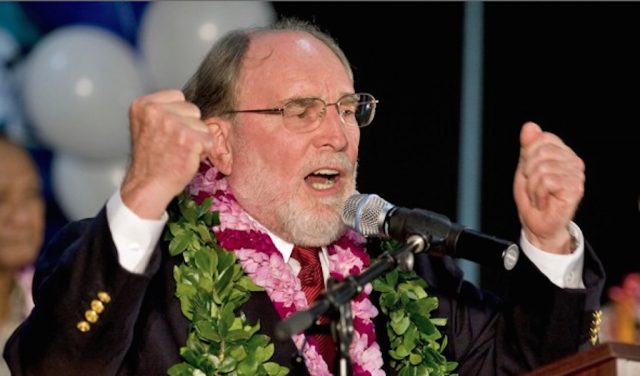 Hurricane Iselle is now gone, and, despite the warnings to stay away from coastal areas, Hawaii residents are back out to enjoy surfing once more. Everything seems to be as it was before Iselle.

You would think that, with lower unemployment rates than before, a thriving economy, and booming tourism business, that the Hawaii governor would have had no problem “coasting” (pun intended) back into office. Unfortunately, that was not the case – and the magnitude 4.5 earthquake that arrived in Hawaii early Thursday morning before Iselle’s predicted landfall at 8PM local Hawaii time that evening only served as an omen of what was to come.

“Abercrombie failed to connect emotionally with the electorate. Normally, the incumbent has a gigantic advantage, because he has every possible opportunity to develop an emotional relationship with voters. But Abercrombie was distant emotionally from his constituents,” said Democratic state senator Josh Green. Green did not vote in the Abercrombie/Ige election.

Voters chimed in on their thoughts behind the election results. Honolulu resident Ray Yourchek, who voted for Abercrombie four years ago, voted for the newcomer this time. “He [David Ige] has a basic, down-to-earth understanding of people. I think we need a change at the top. I think Ige wants to bring the political scene more back to the people, instead of the political interests that we’ve had the last few years.”

“I want something new. He hasn’t done what I expected,” said 73-year-old Maryan Skylar.

And with Ige as the soon-to-be Hawaii Governor, and Neil Abercrombie as the incumbent finishing his term, Hawaii now must brace itself for a high tide and perhaps additional rain and flooding from Hurricane Julio – who is now a Category 2 hurricane. Julio is not expected to strike Hawaii directly, but will stay several hundred miles out in the Pacific Ocean.

“Every waking breath I’ve taken, every thought that I’ve had before I slept, was for Hawaii. Whatever faults I had, one of them has never been a failure to give all that I can every day. Hawaii is everything to me,” Abercrombie said.

Honoring Hershel ‘Woody’ Williams, A Recipient Of The Medal Of Honor During World War II

Not New York Or LA, But The No. 1 City In The World For Travelling And Working Remotely Is In The US