Apple’s iPhone 5C was “unapologetically plastic,” according to designer Jony Ive – and he and Apple never failed to remind us that plastic has a purpose. Keep in mind that a number of tech analysts who favor Apple in the media agreed for years that plastic was cheap and flimsy, so imagine the shock when Apple turned around and decided to copy Samsung Group and issue its own plastic smartphone?

Well, it seems as though the iPhone 5C has one accomplishment going for it: the phone certainly beat sales of the Amazon Fire phone that has only gotten 35,000 copies sold currently since Amazon CEO Jeff Bezos announced it. At the same time, however, it is clear that Apple customers have come to expect a metal smartphone with a more refined experience, and this explains why the iPhone 5C did not achieve the heights Apple anticipated.

Dare we say that a claim that Apple tech analysts have reserved for Samsung should now be applied to Apple? That is, that the iPhone 5C was Apple’s way of doing a Samsung – of throwing a plastic smartphone “against the wall to see what sticks”? Dare I say it, but Apple’s iPhone 5C was 1) an experiment, seeing that Apple had never done it before, and 2) it was something completely foreign to Apple’s design language.

So, I think that, if Samsung Group can be charged with experimentation in products, Apple should wear the same label. In fact, when it comes to plastic, Samsung Group wins by a landslide compared to the terrible-looking iPhone 5C. I honestly think that, with Apple’s finer iPhone 5s and even the iPhone 5, customers who purchase an iPhone 5C are simply throwing away their hard-earned cash on a phone that has nothing attractive to merit the price tag Apple demands for it. My best advice to you is that, should you want a more affordable option, go with Samsung, Sony, HTC, LG, or even Motorola, for that matter. If you buy a plastic smartphone, you should at least buy a smartphone with excellent design. Plastic is clearly not an example of Apple’s better effort.

Now, Apple is preparing to release the iPhone 6 come Tuesday, and with the release of the company’s larger iPhone 6 models comes the question, “Will there be an iPhone 6C unveiled alongside of the iPhone 6?” I can confidently answer this question: in a word, “No.” And the iPhone 6 explains why.

What do we know about the iPhone 6?

I could go into all the details that have been leaked about the iPhone 6: the two display sizes, NFC, iOS 8, two different display materials (sapphire crystal versus Gorilla Glass), as well as the two contrasting prices for both models. I could go into the iWatch and how Apple will pair that with the iPhone 6 for an experience that the iFaithful will deem out of this world…but, then and again, you already knew about that, right?

So, with all of the preliminary rundown information out of the way, the time is ripe to get to the heart of what the iPhone 6 is really about.

Would you be shocked to know that the iPhone 6 is not about Apple putting forth another generation iPhone? That Apple did not build the iPhone 6 to send a statement to Samsung – despite the fact that Samsung is leaving Apple in the dust these days when it comes to the innovations of its smartphones, smartwatches, and even the new Gear VR virtual reality headset that takes gaming to a whole new level (that not even the iPad can surpass)?

The iPhone 6 is not about any of those things; rather, the purpose behind the iPhone 6 is to apologize for last year’s iPhone 5C.

Before you assume that I am dismissing Apple and going into a meaningless rant for which you think better topics should be discussed, let me make it clear that with all the iPhone 6 rumors out there, authentic videos of the next-generation iPhone have already surfaced. That is, the iPhone 6 has been shown in certain videos fully assembled, with everything in place – including the 13MP camera. And it is because of the fully assembled iPhone 6 that this claim can be made. Those who are in the know on the iPhone 6 have compared it to an iPod Touch and said that “it is a big iPod Touch fifth-generation.”

Since the iPhone 6 design language mimics that of the iPod Touch, where does this leave the iPhone 5C? In short, it leaves the iPhone 5C on the outs, and it closes the door to the possibility of an iPhone 6C.

How does one arrive at this conclusion? The iPhone 5C itself looks like an iPod Touch; I myself have called it nothing short of “an iPod Touch with cell service.” When you think about the fact that nothing separates the iPod Touch from the iPhone except for cell service, this statement makes sense.

The iPhone 6C would produce the same design, with some slight tweaks here and there.

The iPhone 6, as has been noted above, looks like a brushed aluminum version of an iPod Touch, and it seems as though Apple decided to borrow the design language from the iPod Touch for the iPhone 6 in order to take the larger iPhones in a direction that would “revolutionize” the iPhone 6 while breathing some new life (or resurrecting, rather) the iPod Touch design.

Now, however, Apple looks to unveil the larger iPod Touch (the iPhone 6) on Tuesday – which means that there is no longer a need for the iPhone 6C or the iPhone 5C, for that matter.

Yes, the iPhone 6 will mean many things to many people on Tuesday when it is announced, and it will still mean many things to many people when the phone is released mid-month for customers who will stand in long lines, charge people for their place in line, give up a week’s pay, and brace themselves in colder temperatures just to get the latest iPhone. At the same time, however, it is still Apple’s apology for the “unapologetically plastic” iPhone 5C that had mediocre sales at best.

Unfortunately, the iPod Touch design language is already proving to be a turnoff for many consumers. “I want to buy the iPhone, not an iPod Touch, or even a larger one,” I have been told from friends and other consumers I have spoken with about the matter.

It seems that, in the end, the iPod Touch design language in the iPhone 6 is a desperate attempt by Apple to take the iPhone in a new direction. The problem with the iPhone 6, however, is that, after Apple announces it on September 9, the company won’t have just the iPhone 5C to apologize for. 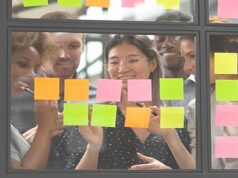