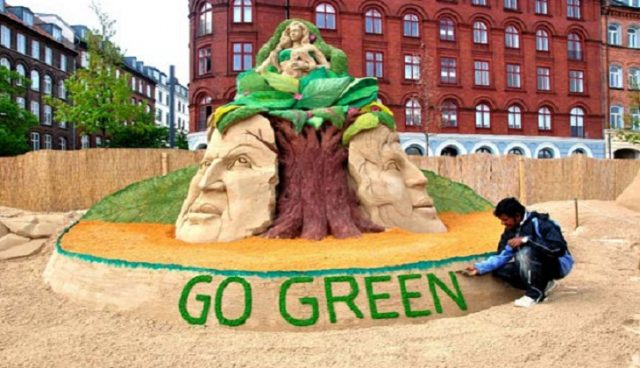 Sudarsan Pattnaik, a reputed Indian artist, has bagged the gold medal at the ninth Moscow Sand Sculpture Championship The magical world of sand 2016. The award, comprising of a gold medal and the trophy was presented by Pavel Minilkov, director of the sand art festival.

Depicted with the message of non-violence and peace, Pattnaik grabbed the championship for best composition, for his 15 feet high artwork.

The work more or less clearly portrays the picture of Mahatma Gandhi with actual spectacles with the message World Peace running from left to right. Pattnaik was seen posing for photographs with his medal and trophy near his sculpture.

Commenting on the achievement, Pattnaik revealed that he is thrilled to win the prestigious title for India. He stated that an attempt has been made to showcase Gandhiji’s non-violence concept through sculpture, which he hope will bring global peace around the world.

During the award function, Pattnaik tweeted with the message that he is receiving the award along with the picture featuring four jury members, which includes the director of the festival.

As many as twenty sand artists from across the world participated in the championship, which garnered significant attention among people in Russia especially from those belonging to India.

Originally from Odisha, Pattnaik has won many international honours and awards. The Government of India awarded him with the Padma Shri in 2014 by taking into account his contributions.

Pattnaik was the brand ambassador of NALCO, India and also established The Golden Sand Art Institute to spread the art of sand art in India. His sculptures include environmental crisis, famous festivals, national integrity, and religious tolerance.

In 2013, he won a first prize (gold medal) at Saint Peters Burg in 12th International sand sculpture competition at Russia.