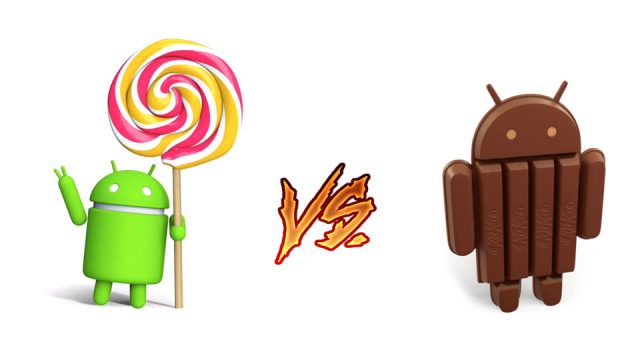 Android Lollipop, or Android 5.0 as it’s known in the tech world revolves around the idea that the updates that were needed were ones that needed to come to push the Android operating system forward. Android has offered some changes to their operating system by completely changing the way the system is felt by their users. While Apple iOS has seen several sweeping updates, Android has seen less aggressive changes over the years making modest changes between operating systems.

Here are 10 of the most impressive changes that were seen between Lollipop and KitKat.

Battery Improvements: Android 5.0 makes significant improvement to battery longevity in their devices. In addition to adding physical improvements to the battery longevity, the new operating systems goes a lot further than KitKat did to let users know when the device is discharging in a graph. Even will allow you to see how much time you have left on the battery before the charge runs out.

Guest Mode: Guest user mode is a big deal in this operating system. The mode allows users to change the way guest users interact with their device. This way, if a user doesn’t want guests, or children to use their phone that might see certain documents, then this is an incredible upgrade in terms of features.

Flashlight Included: When iOS did it many were surprised by how long it took them to do it, with the overall popularity of the ‘flashlight’ apps. Now though, Android has joined the party and it’s definitely a welcomed change. Just a couple clicks and you’re using a relatively high-powered flashlight that can get you through most situations.

Improved Notification Panel: Now you can view detailed notifications in the lock screen and notification bar. Improvements in the design category of the notification panel is also something that is definitely welcomed.

Trusted Places: This might be the most unique and hassle free solution any phone has created. Basically, users can set and identify certain locations as being “safe” and your phone will disable the lock process that you have set for other locations.

Soft Key Overhaul: The soft keys were modified, simplified, and reduced. This is something that just adds a little more comfort to the phone and makes them less present on the actual interface of the device.

Multitasking: You can see more details in the notification area, more quickly get to things, and more easily toggle between apps. It’s a win-win for anyone who uses their phone for business, or just likes to mitigate the amount of time spent on a device.

Chromecast Access: No third-party apps, no additional updates, or extra software. There is an official app from Google that is installed on the device with the update that will take care of Chromecast for you. You can even toggle the media screen by tapping Cast Screen in the notification panel.