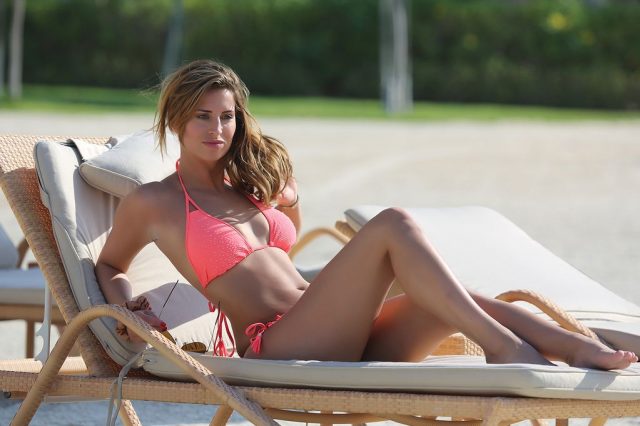 A wardrobe malfunction is considered to be the worst thing for a celebrity, and this is what happened with Ferne McCann.

She was victim to a flashbulb but fortunately, instead of reacting negatively, she took this embarrassing moment very positively.

Ferne blushed at the premiere of ‘Batman V. Superman’ in her sheer dress, which turned into ‘see-through’ one in the dazzling flashes.

After she had got home, she saw some pictures that were clicked of her, and then she realized what lighting had done to the dress.

Even on Instagram, she wrote that one must take a photo with flash before leaving the house. She further added that her entire dress went transparent due to that flash.

This flattering black gown would have looked amazing if it wouldn’t be transparent. It resulted in double takes when cameras began flashing at the Odean cinema. As soon as the camera flashed, her g-string and other assets were on full display.

Currently, ‘This Morning’ host is dating Dele Alli, the England footballer, who no doubt wasn’t complaining about her look.

As of now, she is learning to drive a bus and was quite happy to obtain her license last week. She tweeted that she couldn’t believe she did it.

This morning, she passed her bus driving test and now she can officially drive the bus legally on the roads.

This challenge was started 12 days ago, and she worked hard and put her mind to it. The reason she got her license is for encouraging women to opt for bus driving.

She had never thought in the wildest of her dreams that she would get a chance of driving the bus, but now, she can say that she has officially gained her license.