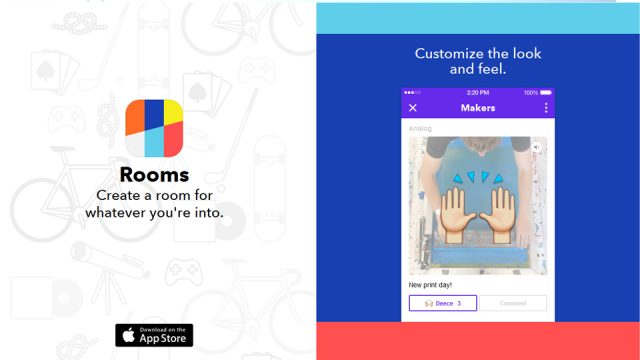 Facebook launched an app on iOS that is an interesting take on what chatting on the internet is now, or what it is becoming. Rather than focus on creating another app that connects to every social networking account you own, this app which was developed by the Facebook Creative Labs team, will not link to any social networks. Users will be able to access it by creating an account with an email address but is significantly less invasive than social networking sites.

The content that will be found on Rooms will vary by the user. The developer team has created some basic rooms and categories, but ultimately, the categories and rooms will be dictated by how users impact the chatroom system.
In many ways, this is a flashback to the beginning of the internet boom – when major players like AOL, and MSN made their bread by creating these platforms which started as chat rooms. Obviously, the further back you go into the history of the internet, the more basic you see these chatrooms develop – and that’s right where this app sits. It attempts to create, or recreate one of the most basic interactions a person could have on the internet – opting for simple and uninhibited conversation.

Rooms privacy statement is a little blurry though, especially when an app labeled ‘anonymous’ is simultaneously sharing data within the company – but ensuring users that their information is not being shared beyond that. Facebook is a company that many have argued takes advantage of user data, and does less than honorable things with it – even creating ads based on your ‘interests’.

Another interesting feature of this app and service is the fact that users can create usernames for each individual room. You don’t have to be “userXYZ” in every room you participate in, if you choose. Another feature that adds some zest, and cool factor to the experience as a whole is the fact that photos can be shared and brought into the equation as easily as text can be.

The move to develop and install this app amongst the host of Facebook Creative Labs, already was a move to help balance social networking out. Many have criticized Facebook, especially since the “Drag Queen” incident, which required users to use birth names, or legal names instead of stage names – which the company later had to back track on, and change their stance on the issue.

Rooms is an app that is interesting, but at the same time – could pose some additional threats to security on the internet. Like the fact that anyone can join, and share anything they see across the entire internet.