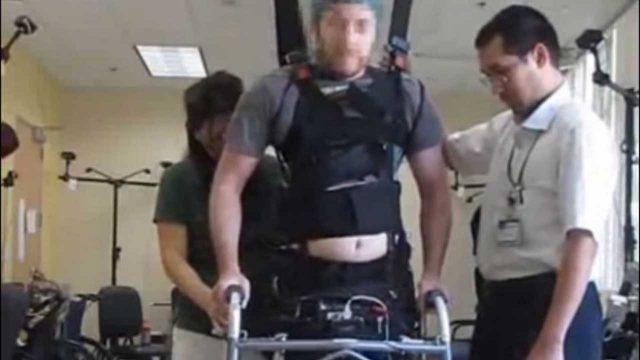 A 26-year-old guy who had both his legs paralyzed has regained his ability to walk using a specially crafted brain-wave system and a harness that is meant for supporting this body weight. This development has been described in the study published recently in the Journal of NeuroEngineering and Rehabilitation.

For walking, the patient had to wear a cap fitted with electrodes meant for detecting his brain signals. Those electrical signals are similar to the ones doctors check when carrying out an EEG or electroencephalogram test. The electrical signals were first forwarded to a computer where they got decoded. The computer then used the signals for sending instructions to a second device, which stimulated all the nerves in the patient’s legs. This action of the signals resulted in the movement of his leg muscles.

The patient, who became paralyzed after suffering a spinal cord injury five years back, succeeded in walking and covering a distance of 3.66 meters of 12 feet using this unique brain-wave system. However, he had to wear a harness and use a walker to ensure that he has some body-weight support; those accessories also prevented him from falling.

Dr. An Do, the coauthor of the study, said that even after staying paralyzed for years, a patient’s brain cells don’t lose their ability of generating powerful brain waves that can allow him or her to walk. Dr. Do teaches neurology at the University of California in Irvine.

Dr. Do added that he and his colleagues have managed to show that it is possible to restore intuitive walking controlled by the brain even after the patient has suffered a complete spinal cord injury.

Earlier, we saw experts use similar systems (systems controlled by brain signals) for moving limb prostheses like robotic arms and legs. What’s more, in an amazing event last year, a paralyzed individual showed how to use the brain for controlling an exoskeleton for kicking a football. The said person made the first kick of the 2014 soccer World Cup.

According to the researchers, revelations made by this new study have proved that an individual who has both of his or her legs paralyzed can stimulate leg muscles and thereby restore walking just by using a brain-controlled system.