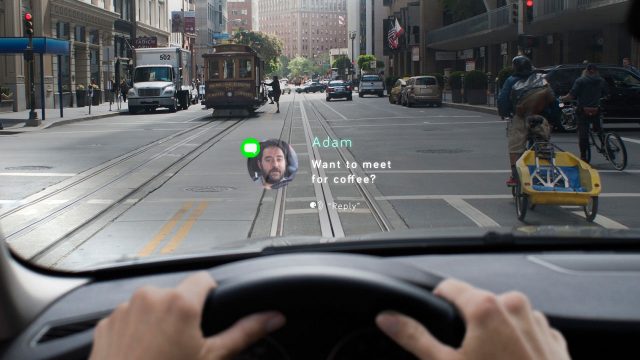 Apple, Inc. (NASDAQ: AAPL) is again in rumors for the Titan electric car project as recent tips from the analysts suggest that the company is going to put a Heads-Up Display or HUD in the car similar to what we see in the airplanes. Good thing, Apple is also rumored to join hands with the BMW that plays a part in the aviation industry.

The Titan Car is expected to have an HUD covering the a majority of the windscreen and the windows to display the useful information as the car moves. It was previously said that it is going to be a self-driving car, but now these rumors suggest that the Titan EV is also going to have the steering wheel for the manual control.

Rumors stated that the HUD will display useful information such as weather, traffic ahead and much more. We can expect it to have some features from the iOS as well, such as current track, recent updates and other notifications, displayed in such a way that they don’t distract the driver’s vision.

This EV project is likely to have more features such as accident protection, speed control, and warning messages in case anything is wrong. One of the analysts suggested that it is going to be fully powered by the advanced artificial intelligence and SIRI to help the commuters travel safely.

It is just one thing, but often in case of emergencies we break the rules to save a life or help our family members. We just hope if Apple makes this car there must be an overriding feature so that the driver takes the control in the first place.

Apart from this, if this car comes out, then it is out of choice that I will be buying it in the first place. Apple, Inc.’s software sometimes is pretty buggy and don’t want the car to behave in the same way as iPhone 6 did during the first month of launch.

This could be fake rumor, but Apple working on an EV project is not, because the company has already hired a pool of engineers from the automobile industry and has also asked to have a permission to access a formal naval base that is being built as a test ground for the companies to drive their automotive vehicles.