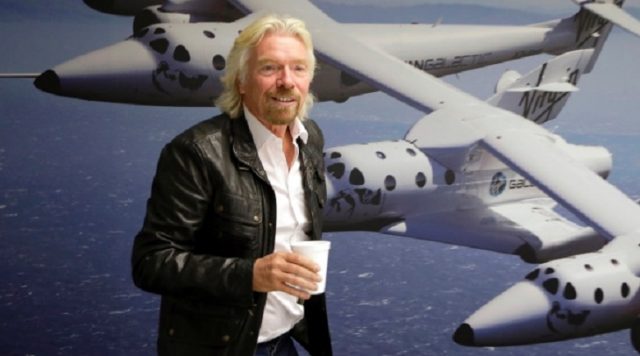 Sir Richard Branson’s Virgin Galactic space tourism project is back on track. A new version of rocket plane SpaceShipTwo is ready to be launched, with the British-born entrepreneur due to unveil the craft today. It’s a step in the right direction again after the break up of the original craft during testing in 2014.

In that incident, Branson’s project suffered a huge setback in an accident which resulted in the death of the co-pilot. An investigation found Michael Alsbury had prematurely activated a braking system on the craft in an attempt to slow it down for re-entry. Pilot Peter Siebold was seriously injured in the crash but was able to parachute to safety. Co-pilot Alsbury was killed outright.

Virgin Galactic have since been working on the new reusable winged rocket plane – which aims to take passengers up into suborbital space. A crew two will transport up to six people at a time.

SpaceShipTwo is designed to sit under a “mothership” jet aircraft which takes it up to the first 45,000 feet. From there, the winged rocketplane releases itself, fires up its engines and climbs rapidly to the edge of the atmosphere before descending again for landing.

Branson’s dream is to send ordinary people to the fringes of space for a 5-minute journey. They will get to see the earth from 62 miles up, briefly experiencing weightlessness. The estimated ticket for such a trip currently stands at a hefty £160,000, or USD $230,000.

Branson’s Virgin Galactic is not the only company interested in sending paying passengers to space. Jeff Bezos of Amazon, Elon Musk of SpaceX and Microsoft’s Paul Allen are among the other billionaire entrepreneurs working on similar plans.

Sir Richard, though, welcomes the prospect of competition. Pointing out the benefits of having multiple enterprises involved, he says companies should succeed for “a fraction” of the cost it would require from a government-sponsored space programme. Branson also praised the spirit of experimentation and innovation between the competing projects.