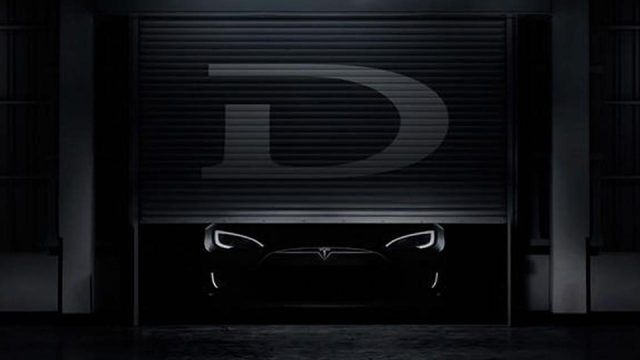 Tesla Motors CEO Elon Musk was the individual unveiling the brand new, and all-wheel-drive version of the company’s newest vehicle craze. The electric Model S that would be bettered prepared and geared for getting through the long and snowy winter months, or to simply appeal to new customers that otherwise wouldn’t consider the car maker due to the lack of safety in snow.

All of that changed with the unveiling of the “D” option of the Tesla Model S sedan. The letter and name “D” “stands for dual motor,” CEO Elon Musk said at an event in Hawthorne. This latest model has a higher top speed, is more efficient, and can accelerate from zero to 60 mph in just 3.2 seconds.

However, more exciting to many than the speed, or the ability to travel more effectively in snowy climates – is the fact that Tesla is mass producing vehicles equipped with front-facing camera’s, radar, and even a 360-degree ultrasonic sonar that will negotiate and determine the road conditions, and put people even closer to automated driving.

Overall, the vehicle has some pretty impressive specs that go well-beyond that 0-60 mph in 3.2 seconds. The vehicles top speed is 155 mph, the high performance all-wheel drive with specifically designed suspension for exceptional power and handling, the 8-year, infinite-mile battery and drive unit warranty, and 275 mile range at 65 mph to name just a few.

The dual motor, auto-pilot capable vehicles will become available between December and February, and while specific pricing was not available on this particular model, latest indications are that the vehicle will start at, at least $94,999 – comparing the model to other vehicles in its class, and that are produced by Tesla.

That said, Tesla is working hard to capture more of the luxury vehicle market. By expanding their climate-zone, they’re going to appeal to a larger group of potential buyers. People who previously wouldn’t buy a vehicle that wasn’t all-wheel-drive, to individuals that were looking for something that would function well in the snow, or in wintery climates.

Sony Xperia Z3v launches in US on October 23rd

Overall, this is a big step forward for Tesla Motors, but it remains to be seen how it will perform on the open market.