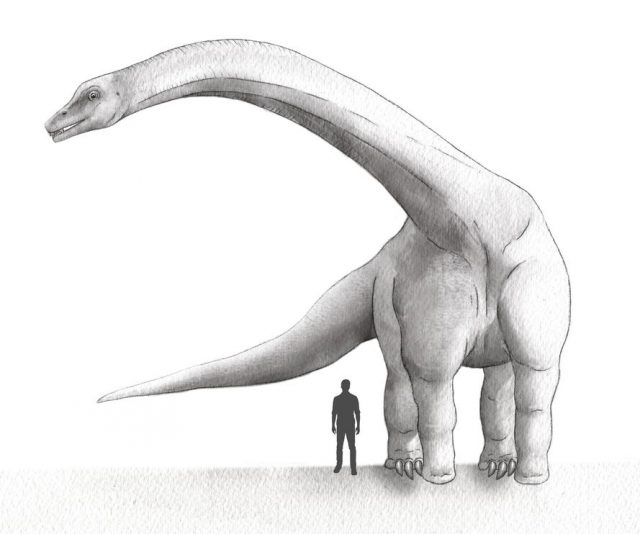 In 2005, Drexel University paleontologist Kenneth Lacovara went digging in Southern Patagonia, Argentina, when all of a sudden he stumbled upon his twentieth bone of the day, a six-foot femur. Lacovara had been working for some hours, and did not think the bone was any more spectacular than the others. He worked until the end of the day, and unearthed not only the femur but also a fibia, tibula, and 6 vertebrae from the dinosaur’s tail.

In total, Lacovara had uncovered 130 bones (70% of the dinosaur) that would become the largest land dinosaur in known history.

How large of a dinosaur? One so large that it weighs more than an African elephant (5 tons), more than a T-Rex (10 tons), Diplodocus (18 tons), Brachiosaurus (around 40 tons), and even a Boeing 757 (50 tons). This largest land dinosaur weighs 65 tons, which means that it is the size of 13 African elephants or about 7 T-Rex dinosaurs put together. The size of this land dinosaur prompted Lacovara to name the dinosaur “Dreadnoughtus,” (scientific name dreadnoughtus schrani) which means “fear nothing.” Lacovara says he took the name of the 65-ton dinosaur from the twentieth-century, massive battleships.

Dreadnoughtus was a plant-eater (herbivore), but it would have had no trouble defending itself against smaller carnivores. The find not only shows that this dinosaur is the largest land dinosaur to date, but that the Dreadnoughtus was still growing when it died in Southern Patagonia 77 million years ago. “With Dreadnoughtus, there’s no indication that there was any cessation or slowing of growth [in the bones]. When it died at 65 tons, it was growing fast, which is kind of scary,” Lacovara said. Keep in mind that, as said above, the femur of the Dreadnoughtus was over 6 feet tall, nearly as tall as Lacovara himself.

Ancient mammals may have hunted at night 250 million years ago

Not only did Lacovara and paleontologists uncover the Dreadnoughtus’s weight, but they were also able to discover that the neck of the large land dinosaur stretched to 37 feet long, indicating that it likely refrained from walking much and traveled seldomly.

The unearthing of the Dreadnoughtus sets the record for the largest dinosaur, which had previously been the Elaltitan lilloi, an Argentinian titanosaur discovered in 2012 who weighed 47 tons.