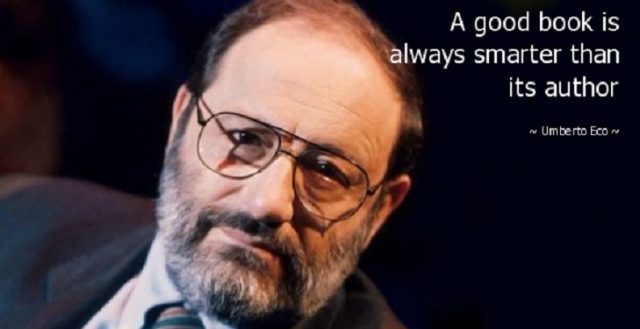 Italian author and intellectual Umberto Eco – who wrote the blockbuster novel The Name of the Rose – has died at his home in northern Italy. Italian newspaper La Repubblica reported having been told the news by the family on Friday.

An unidentified relative told them Mr Eco had passed away after a battle with cancer. The death was affirmed by Eco’s US publisher, Houghton Mifflin.

Eco’s most famous work, The Name of the Rose, transported him from relative academic obscurity to the pinnacle of literary fame in 1980.

Aged 48 at the time of its release, Eco saw his book become an international smash hit, selling more than 14 million copies and translated into dozens of different languages.

His bestselling book examines the recollections of an ageing priest as he looks back on events that took place in a monastery in 1327. He recalls how as a novice he and his mentor were called upon to reveal the perpetrator of a series of gruesome murders.

Combining brilliant historical detail with a plot line worthy of Sherlock Holmes, the book went on to become a film starring Sean Connery and Christian Slater.

Mr Eco was a man of many talents. Born in Alessandria in the Piedmont region of Italy in 1932, his interests included philosophy, literature, mediaeval history and semiotics.

Eco had always loved writing – as a teenager, he wrote fiction and fantasy. He took his doctorate in philosophy in the year 1954 before going to on to work at Italian broadcaster RAI.

In later years, he contributed to newspapers and magazines. Always a staunch defender of the ‘complex’, Eco decried the appointment of Silvio Berlusconi as “strongly anti-intellectual.”

The Name of the Rose garnered a handful of literal international prizes at the time of publication. Eco, though, always found his success hard to fathom, complaining to journalists he wouldn’t spend “the rest of his life” talking about a novel he wrote in the past.

Mr Eco was a professor emeritus at Bologna University at the time of his passing.