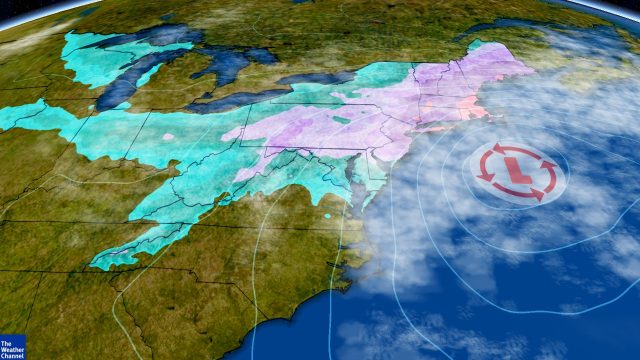 Weather warnings have been issued in the northeastern United States, as winter storm ‘Olympia’ continues to move from west to east. Freezing rain and sleet advisories have been issued for the zone from North Carolina all the way up to Maine.

Accidents and traffic incidents have already been reported throughout North Carolina, South Carolina, the Virginias and Pennsylvania, with ice the primary factor for highway agencies and police.

Snow and ice were reported to be causing issues for drivers in Vermont and New Hampshire today, with several public schools keeping their gates firmly closed. Now, though, it seems the temperatures are rising and in place of snow, some areas may see freezing rain.

The National Weather Service have warned the Florida area could be affected by this latest winter system. The Washington Post refers to meteorologist Chuck Caracozza, who warns of more inclement weather Tuesday as the storm moves through.

High winds are the problem in the southernmost states –  a tornado ripped through the North Floridian town of Century last night, damaging ten buildings.

Further north, ice on the roads signifies delays and the possibility of accidents. Transportation agencies are warning drivers to take extra care in the affected regions.

Much milder weather is expected in the northeast soon after the storm moves through. The National Weather Service says Boston, having seen temperatures of minus 9 on Sunday, should get back up to around 50 Fahrenheit by Tuesday afternoon.

On Tuesday night, it’s expected most ice and snowfall will have turned to rain, bringing the risk of localised flooding to some places.

However, for the areas around West Virginia, New York and Pennsylvania, the mercury could drop again as cold air follows the small pressure through. More than a foot of snow is forecast in the Appalachians, with New York also expected to see more wintry conditions yet.