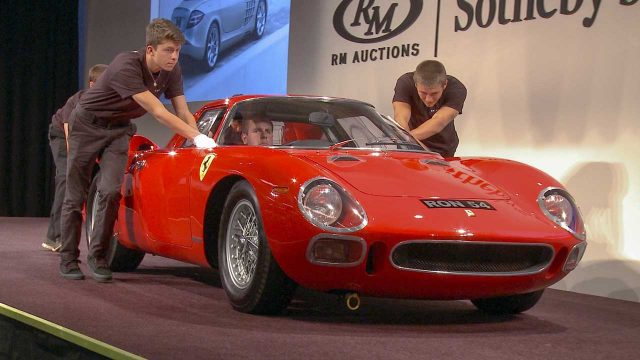 California’s Monterey witnessed RM Sotheby’s auto auction on Thursday. The auction saw the largest private collection one-day sale ever. Sotheby’s “The Pinnacle Portfolio” included a collection which brought in about $67 million. It was tagged as the ‘collection of the greatest and most iconic European Modern supercars’ and the first day’s collection itself amounted to an enormous $75.4m.

However, the pinnacle portfolio’s 1964 Ferrari 250 LM race car set the record by being sold at $17.6m. It was one of the 32 of its kind and fell short of the estimated $80m but was sold at a high price nevertheless. The auto was ordered from the Ferrari factory by privateer racer Ronald. Fry Last year’s record for the category was set at $66m. The sale had included Ferrari 250 GTO Berlinetta, which was sold at $38.1m–the highest price for a car being sold publicly.

Even more surprising was the fact that Pope John Paul II owned a 2005 Ferrari Enzo which was built as a gift for him and which he now sold at the auction for $6.1m. He auctioned it with the aim to use the proceeds for victims of the 2004 Boxing Day Tsunami in Southeast Asia. One fascinating fact about Pope’s Ferrari is that the vehicle he owned was the 400th and the last Enzo built. Apart from this, an orange 1998 McLaren F1 sports car managed to beat its estimated value of around $12m and was sold for a high $13.8m. A 1953 Jaguar C-Type Works Lightweight was sold at $13.2m to make it the most expensive Jaguar to be sold at an auction.

There was a grave disappointment when the yellow 1960 Ferrari 250 GT SWB Berlinetta Competizione was unsuccessful at finding a buyer even though it was estimated to be sold at $17m. Overall, the auction proved to be a flourishing endeavor with 88 percent of the vehicles that were offered being sold successfully. It also marked the victory for the partnership between RM and Sotheby’s and will keep the spirits going for the ongoing sales at Pebble Beach.