Samsung Electronics has unveiled a new solid state drive called as PM1633a with a skyrocketing storage capacity. With a never been seen capacity of nearly 16TB, the SSD is small enough to fit perfectly in your modern laptops and desktops. It is that small – only 6.35cm. The SSD was introduced at the Flash Memory Summit in California.

As per the reports, the drive is capable of storing the data of 15.36 TB, which makes it burst the record set by the Western Digital and HGST that only had 10 TB of flash storage. This much of storage can help you store on an average of 4 million songs or thousands of HD movies. This may seem to be a lot, but when compared with those that are running on the server, the storage capacity is pretty small. 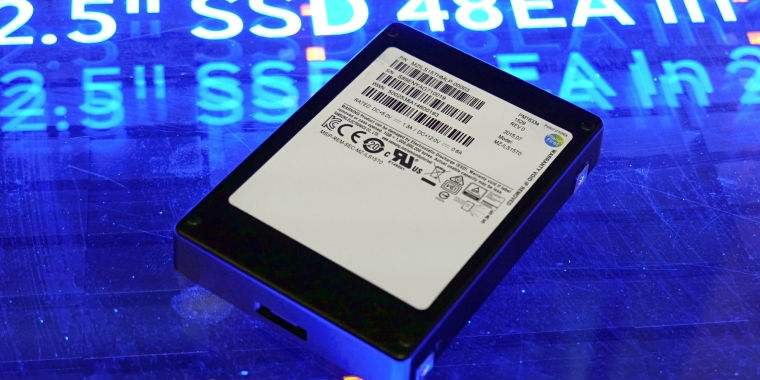 However, if combined, the new 16 TB SSD from Samsung can help the servers become even more compact and have less operating rate for the high performance it achieves.

As per the other details are concerned, the South Korean giant spit no word about the price, availability and speed metrics of these drives. Apparently, Apple Inc’s SSDs based on a technology that uses a PCIe port as a connectivity front are the fastest drives in the realm of personal computing – and also these have been made out of the Sandisk NAND flash storage chips. The top speed of drive can reach up to 900 MB/s read and write. Samsung is yet to provide us with such reports.

As far as the price point is concerned, rumors indicated that the company is going to ship these drives with a price tag of $5000 or more – the bar is going to be somewhere near that only. The company demonstrated this drive by placing them in a cluster on a server that reached a total capacity of 768 TB.

However, the question arises, are consumers going to love this new technology for storing their photos, music, important files and much more. The right answer would be that they would love to have this drive, but this isn’t worth it.

We, as a consumer, don’t require much of storage. Professionals in video and music industry are going to love it as it will help them place all of their files in one place rather than different portable hard drives.

Even though Samsung hasn’t revealed on how these drives are going to connect to the motherboard, we can expect it to be the SATA ports. SATA ports on an SSD limits the data transfer rate, and that’s why we don’t see them on Apple computers.