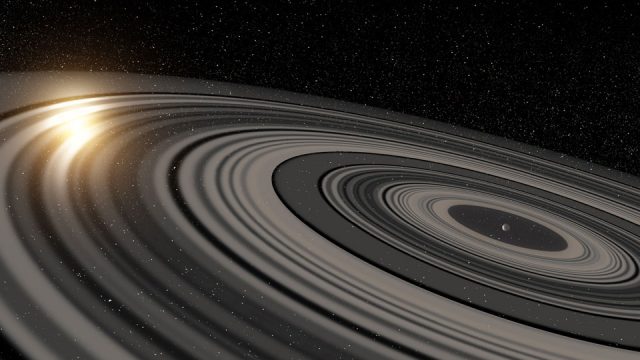 This spectacular new discovery by the astronomers has taken the world by surprise.

Astronomers from Leiden Observatory, Netherlands together with the astronomers from the University of Rochester, USA have discovered a planet with a massive ring system that is at least 200 times larger than the one Saturn possesses.

The discovery was made during the analysis of data collected from the SuperWASP observatory. This is the first ever ring system found outside the solar system, and it was discovered in 2012 by a group led by scientist Eric Mamajek from the University of Rochester. They reported about the star J1407b and unique eclipses.

The present work done under the supervision of Matthew Kenworthy, Leiden Observatory showed there are more than 30 rings present in the system. Every ring seems to be huge in size. Scientists also noticed gaps in the rings, an observation that strongly supports the idea of exomoons formation.

Kenworthy explained that the eclipse went on for quite a few weeks but because of the presence of fine structures in the rings, rapid changes were observed within much shorter time spans. He also said that the distance of the star was too much to have a direct visualization of the ring but a model was made based on the distinct variations in the constantly changing brightness of the star light that pass through the system. “If we could replace Saturn’s rings with the rings around J1407b, they would be easily visible at night and be many times larger than the full moon,” he added further.

Mamajek said that this planet is far larger than known big planets like Jupiter or Saturn. He termed it as super Saturn. This massive ring system is also found to be responsible for dimming of the light J1407 contains. The astronomers figured out from the light curve that the diameter of the ring system is likely to be around 120 million kilometers.

Any further observation about J1407b by space enthusiasts needs to be reported to the American Association of Variable Star Observers (AAVSO).