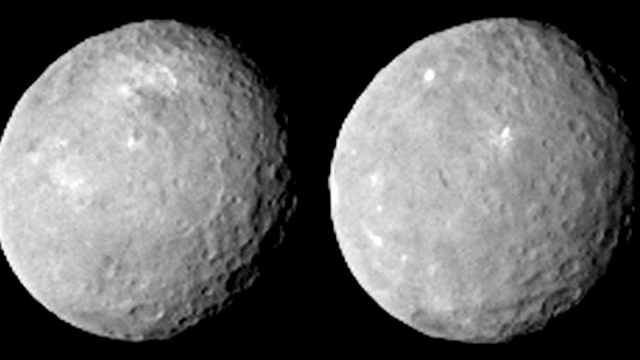 It seems that the new series of images captured by NASA’s Dawn spacecraft has finally resolved the mystery surrounding the dwarf planet Ceres. The said images have been captured between May 3 and May 4 from a distance of 13,600 km or 8,400 miles. .

This view was the closest the astronomers have ever managed to get; it allowed them to have a much closer look at the brightest spots on a crater located in the planet’s northern hemisphere. The view revealed that those bright spots contain numerous smaller spots; however, still astronomers have not managed to unearth their exact nature.

Christopher Russell, Dawn mission’s principal investigator, said that scientists working on this project can now say that those spots on Ceres have are so bright because of the sunlight reflected on the highly reflective material on their surface. The said material, according to Russell, is most likely ice. For those who don’t know: Russell represents the University of California, LA.

The images captured by Dawn provide scientists with fresh insights into the shapes and sizes of the craters and a range of other fascinating geological characteristics of the planet’s surface. The resolution of the captured photographs is 0.8 mile per pixel.

It is the first time a spacecraft has been sent to a dwarf planet. That’s not all; this mission by NASA is also the first to orbit more than one solar system targets. For those who don’t know: Dawn was also appointed for studying a giant asteroid called Vesta. The NASA spacecraft was a part of this mission for a period of 14 months during the years 2011 and 2012; it arrived at the dwarf planet Ceres this year on March 6.

This mission of Dawn is managed by the Jet Propulsion Laboratory (JPL) of NASA on behalf of the agency’s Science Mission Directorate in Washington. The project is a part of the Discovery Program run by the directorate; it’s a program managed by the MSFC or Marshall Space Flight Center, an NASA unit located in Huntsville, Alabama.

The overall responsibility of the Dawn mission has been on the University of California, Los Angeles. The spacecraft used in the project, on the other hand, is manufactured by a Dulles, Virginia-based Company called ATK Inc. The project has several international partners too including big names like Italian National Astrophysical Institute, German Aerospace Center, etc.