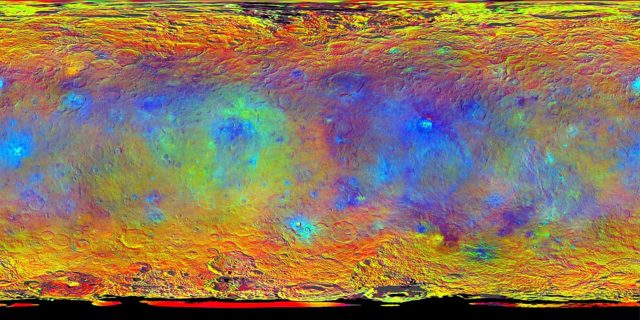 Freshly released maps of the dwarf planet Ceres are showing the huge, pyramid-like mountain on it and its enigmatic bright spots, in a completely new light. These new maps have been shared by the Dawn spacecraft of NASA. For those who don’t know: the said spacecraft has been orbiting Ceres since March.

These maps will allow you to have a closer look at the elevation and compositional differences across the heavily centered planet, which also happens to be the biggest object located in the primary asteroid belt separating Jupiter and Mars.

One of the newly unveiled topographic maps focuses on a mountain referred to as “the Pyramid”. The mountain is around 6.4 km (4 miles) high. There’s another map, which has zeroed in on the Occator crater. This 90 km (56 miles) wide crater is special as its floor houses the most luminescent mysterious bright spot of the dwarf planet.

The team at Dawn has also come up with topographic and composition maps of Ceres. The topographic maps contain names of certain features on the planet’s surface that recently got approval from the International Astronomical Union. Each of those names has a unique agricultural theme. For example, a 20 km (12 mile) wide mountain close to the planet’s north pole has been named Ysolo Mons, which is basically the name of a festival celebrated in Albania to mark the first day of eggplant harvest.

The newly released maps of Ceres have been discussed vividly at this year’s European Planetary Science Conference, which is currently underway in Nantes, France. This year’s EPSC was scheduled to be held from September 27 through October 2.

When talking about the new maps at EPSC, the Dawn team members have shared one puzzling observation the spacecraft made during this ongoing mission. They said that there have been three bursts of energetic electrons emitted by Ceres. According to them, those electrons might have been generated due to interactions between solar radiation and the dwarf planet.

Chris Russell, the principal investigator at Dawn, said that the team never expected to have such an observation. Russell, who is a representative of the University of California in Los Angeles, added that Ceres has not stopped its habit of leaving scientists amazed. According to him, every time experts at NASA examine images and events taking place on the dwarf planet, they come across new revolutionary facts.

Monkeypox: A.2 strain found in 2 cases in India. Know everything about the West...

Opinion | As Russia waffles on the space station, NASA should think ahead –...

Calm behind the storm: How little madness and loads of maturity is helping Rishabh...