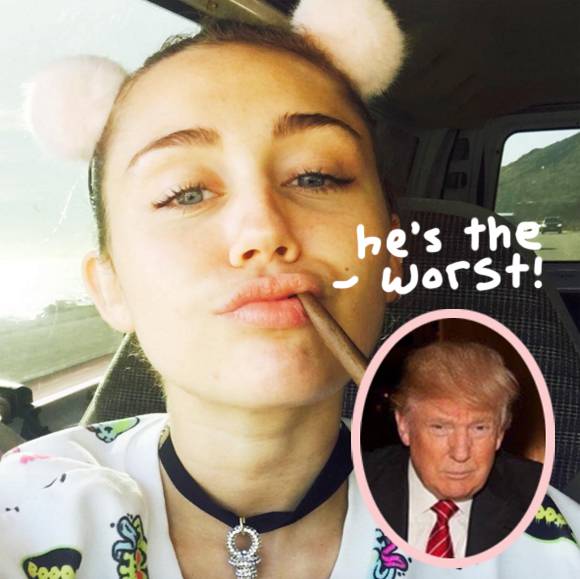 On March 01, 2016, after Donald Trump won the Super Tuesday, a campaign based on exclusion and racism, Miley Cyrus, the 23- year-old singer got to Instagram and with her three series of posts, bashed Donald and stated that he is not the ‘”f*cking chosen one!”. After calling him a ‘nightmare’, she even threatened of leaving the country if Donald is elected the President.

Her Instagram caption read “gonna vom / move out da country. #aintapartyindausaanymo” and she didn’t stop there. She also went ahead for asking Donald about the issue of hunting, which we might not have heard in the midst of these elections. Being an avid lover, Miley shared a photo of herself in tears with a trophy hunter holding a dead mountain lion along with one more shot of Trump posing with the hunter.

In the caption, she eviscerated Trump and his hunting price. She pointed out to the tears rolling down her check and added that she is so sad and scared not only for the country but also for the animals, who she loves more than anyone else in the world.

She says that the image on the right is very disturbing. Miley believes that this isn’t destiny but one’s job to decide when the life of a living thing is over. She again told Trump that he is not God no matter how much he thinks he is. She went ahead for slamming the arrogance of Trump and reiterated her commitment of relocating it if he is elected.