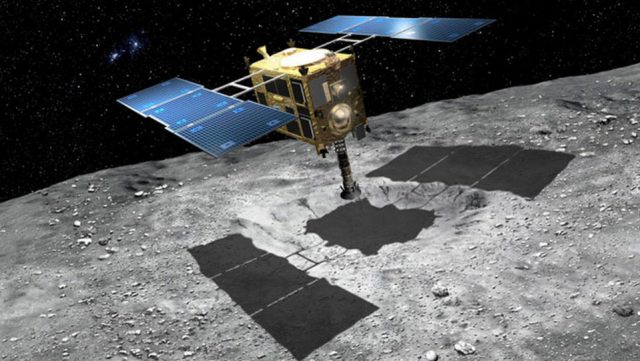 A small asteroid that circles the sun and even crosses Earth’s orbit is getting a close up from a Japanese probe. The goal is to unlock some of the mysteries, and determine whether the organics of the asteroid share any similarities to Earth. The Hayabusa-2 spacecraft was the craft that would be doing much of the exploring, measuring, and analysis, which was scheduled to take off of a Japanese H-2A rocket over the weekend.

However, weather made the launch impossible due unfavorable weather conditions. The Asteroid, which was originally discovered in the late 90’s, is known as Asteroid 1999 JU3 and is completely dark – and scales an estimated 3,000-feet. The asteroid was discovered as a part of the LINEAR project which was sponsored by the US Air Force, M.I.T., as well as NASA.

To this point scientists believe that the asteroid likely contains materials like amino acids, water-rich minerals, and most-specifically carbon – which is considered one of the building blocks of all types of life. That being said, it leaves a lot of promise for scientists to determine and understand what might be ahead of them when the tests are executed.

Scientists point out that it’s really almost impossible to make a determination as to whether the asteroid was ultimately contaminated when one falls to Earth. Studying an object here on Earth after it has crashed through the atmosphere and from space is beneficial – but leaves those mysteries. Studying an asteroid in its natural environment – space – is something that can yield a number of breakthroughs with further study and research.

“Knowledge of those materials help us not only learn about the solar system in terms of its early stages of formation, but it also helps us (discover) how life on Earth may have evolved and where the oceans of Earth may have formed,” said Paul Abell, a planetary scientist with NASA’s Johnson Space Center in Houston. Ultimately what this comes down to is the possible information and the ways that the information that is learned can be applied to the array of subjects moving forward.

Japanese scientists with the first Hayabusa mission did exceptionally well in 2010 when a similar mission went very well from start to finish. Abell noted that the project “made major breakthroughs.” The samples, lessons learned, and additional information that can be yielded about the history, evolution, and future of the solar system – and Earth make projects like these incredibly worthy in terms of raw investment.