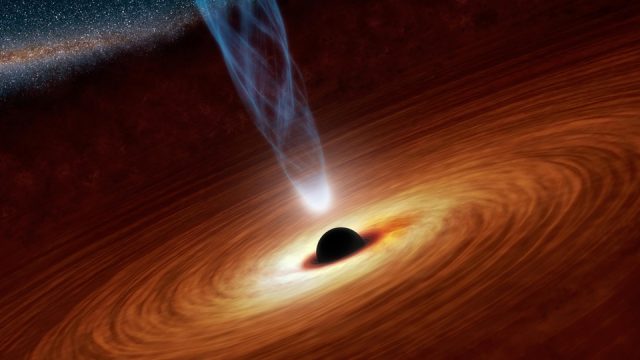 Black hole’s that are bigger, are not always more beastly. In fact, astronomers have recently discovered that the complete opposite of what was originally thought, might be true. Scientists used an analogy to a 128-pound Japanese eating champion in comparing him to a sumo wrestler.

The basic logic before was that the size of the mass dictated how much would, or could be consumed by such a thing. In essence, the bigger the black hole, the more, and more quickly gases would be consumed. Larger black holes, in theory would have had a greater appetite, and thusly would have consumed more over a period of time.

However, the new theory and discovery suggests the opposite is true. The black hole that is known in the science community as P13 is located 12 million light years away, on the edge of a galaxy called NGC7793.

Dr. Roberto Soria in a release, noted that as gas is pulled toward and into the black hole, it becomes brighter and hotter. He went on to note that P13 was initially noted because of its brightness. Astronomers found that it was at least a million times brighter than the sun, and because of this assumed that it had to have been exceptionally sized.

Especially since compared to black holes here in our own galaxy are significantly dimmer, in contrast. However, when scientists measured the mass of the black hole, they found that it was actually significantly smaller than they had initial predicted.

What they found was a black hole that was a little less than 15 times the mass of our own Sun, an impressive stat for a black hole that consumes at the level this black hole consumes at. “These are the champions of competitive gas eating in the Universe,” Soria said, making these particular black holes that have been recently discovered a true spectacle.

It’s entirely possible that moving forward scientists will be left reevaluating what black holes are most significant, and what ones are most powerful, now that the basic mindset around them has been altered. To discover that the smallest black holes could somehow be the most powerful, is something that defies traditional thought and logic – but now gives scientists a unique perspective moving forward as they try to continue unraveling the mystery that surrounds the black hole.