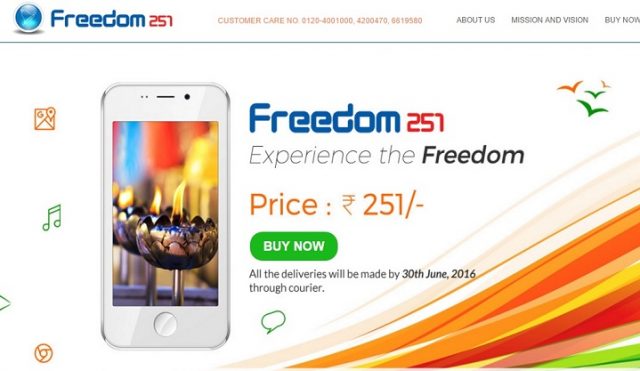 Freedom 251 ruffled many feathers when it announced in February the cheapest Android Smartphone with a price tag of Rs 251. It was manufactured by Ringing Bells Pvt Ltd.

It is making news again when it said it will offer to launch a 32-inch high-definition LED television christened “Freedom” – in the first week of July for an unbelievable price of Rs 10,000. The cheapest LRD HD TV in this range is available for Rs 13,000 plus.

CEO of the firm informed it is the most affordable TV set available for only RS 10000, and the delivery will be made in two days. It will sell the TV sets online and at present the company claims that it has more than one lakh sets in its inventory.

Since the day the Ringing Bells Pvt Ltd announced its offer of an Android Smartphone for Rs 251, it has been embroiled in a controversy. Since the announcement the company has been trolled and skeptics doubted the authenticity of the offer. An FIR has also been launched against the firm.

Despite all the controversy, the manufacturer is unfazed and said delivery of the devices will commence from June 30. The company claims it is incurring a loss of Rs 100 to Rs 150 per piece but will break even because of the volume of the sale. It has prepared a stock of 2 lakh sets. It had earlier said that it will supply 20 lakh sets by July 30. However, it received over seven crore registrations before its payment gateway crashed within three days.

Freedom 251 boasts a 1.3 GHz quad-core processor with 1GB RAM and 8GB internal memory which could be augmented to 32GB with the help of external memory cards. The company has however never shown the device and only a photograph has been demonstrated.

Do you think Freedom 251 is real? Do you think that the manufacturer will hike the price later? Please give your view in the comments section.