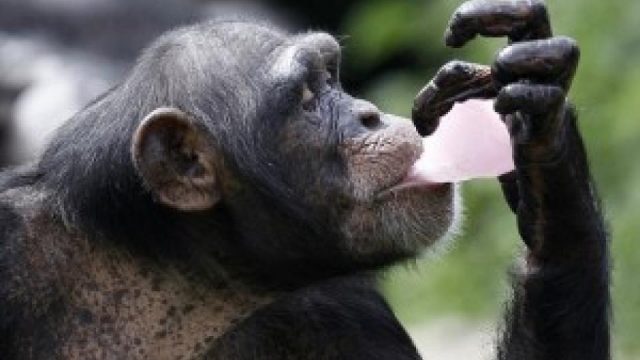 A group of scientists representing Yale and Harvard have found that chimpanzees possess the cognitive ability to cook. However, for showcasing this ability the mammals must be provided with ovens.

According to scientists involved in the above mentioned study, the animals are definitely not ready to compete with the likes of Gordon Ramsay, but they surely have the foresight and patience of resisting consumption of raw food if they get a device meant for cooking those raw food items.

The researchers have written that many primitive species including the chimps find it difficult to give up food items that are already available to them and show clear limitations in resisting food in front of them.

However, during this recent study the researchers discovered that chimps readily give up a raw piece of sweet potato presented to them anticipating that they will get a cooked piece of the same a few minutes later. Such self-control and foresight can only expected to be seen in cooks who have spent years in his profession.

The researchers decided to carry out such a study based on a hypothesis by anthropologist Richard Wrangham, which suggests that changes in human evolution might be driven by self cooking. This hypothesis was first presented by Wrangham and his colleagues around 15 years back in an article published in the journal Current Anthropology.

Wrangham argued that the art of cooking was invented around 2 million years back; hard evidence, however, suggest that it’s a procedure that dates back only around a million years. For Wrangham’s ideas to be true some of our early ancestors, who were perhaps not much advanced compared to the chimps, had to possess the ability of transforming raw food items into cooked food.

Alexandra G. Rosati of Yale (but, will soon move to Harvard) and Felix Warneken of Harvard, two experts of cognition, joined hands to carry out a study to find out whether chimpanzees posses the cognitive foundation required for cooking.

One of the biggest hurdles for Rosati and Warneken was chimps’ inability of using fire. In addition, the scientists were also a bit apprehensive when it came to giving these animals access to cooking devices. The researchers, thus, came to the conclusion by introducing the chimps to a method that emulate cooking.