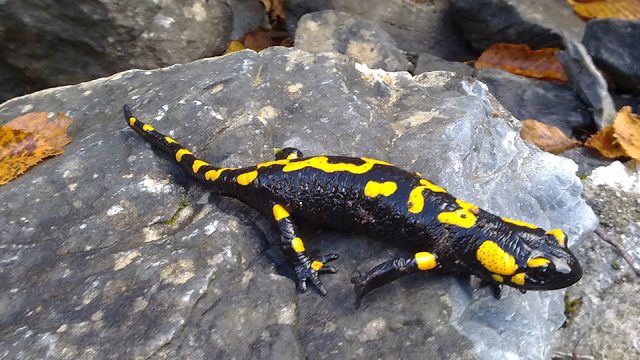 A deadly, skin-eating, fungus could do widespread and catastrophic damage to salamanders in the United States. The fungus has already made it to Europe from Asia and is posing substantial threats to entire species of creatures in Europe.

This week a team doing research on the fungus noted that while it was first detected in Europe nearly a year ago, it has since killed salamanders in the Netherlands and Belgium. The problem is that the fungus is so closely related to another fungus which has wiped out entire amphibian species, which means it would pose a serious threat to the ecosystems as a whole. The new fungus is called B. salamandrivorans, or Bs, as it’s called for short – and is closely related to the fungus called Batrachochytrium dendrobatidis or Bd for short. That fungus destroyed entire populations of frogs, toads, and salamanders. This though is not a new fungus. This is a fungus that has been around for decades and has eliminated 40% of species in some areas.

Bd and Bs are members of the chytrids fungi family, and scientists have begun testing to see just how catastrophic results would be if the fungus should reach the United States. In fact, the cause for concern was so great with this fungus that scientists from 12 countries decided to work together to determine how great the impact would be on the United States amphibian population, through lab tests.

This is the type of disease that would ultimately have the highest mortality rates, and would be the greatest cause for concern when it comes to widespread damage in terms of making species extinct.

Google's Pixel 3 and Pixel 3 XL receive what is almost certainly their last...

Windows 11 features, pricing and everything you need to know – TechRadar

HBO's The Last of Us Series Gets Release Window – CBR – Comic Book...

Jennifer Lopez on the Super Bowl Halftime Show: ‘It Was the Worst Idea in...