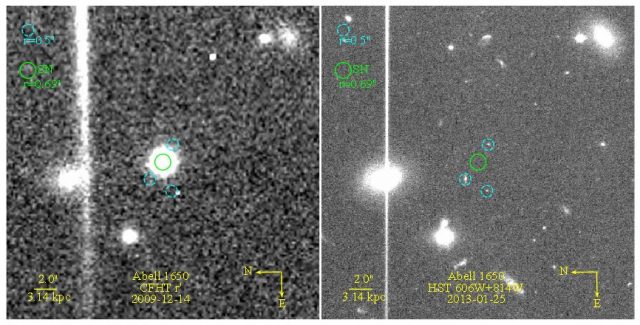 A series of sharp images captured by the Hubble Space Telescope has confirmed that three supernovae have exploded in the dark void of the intergalactic space. The stars, which were first noticed by astronauts several years back, were thrown away from their home galaxies billions of years ago.

Supernovae are mostly found in galaxies with several hundred billion stars in them. According to experts, each galaxy might experience an explosion of one of these stars per century.

These solitary supernovae can provide scientists with essential clues about matters present in the vast and mysterious empty spaces separating two galaxies. Also, they can also assist astronomers in comprehending how the galaxy clusters were formed and how they have evolved since the beginning of the universe.

Melissa Graham, the leader of the team of scientists carrying out this study and a postdoctoral fellow representing the University of California, Berkeley, said that these solitary worlds have been reminding her of Thrial, a fictional star that found a mention in the novel Against a Dark Background.

Thrial, according to the novel was situated millions of light years away from any other star in its home galaxy. Iain Banks, the author of the novel, also mentioned that Golter, one of Thrial’s inhabited planets, has a night sky that’s almost starless.

Planets orbiting the exploded supernovae probably had night skies similar to that of Golter; however, the bad news is that all those planets have been destroyed fully by the explosions.

During this study, Graham was assisted by Texas Tech University’s David Sand, University of Victoria’s Chris Pritchet and University of Arizona’s Dennis Zaritsky. Together they have reported their analysis at a conference held at the Raleigh campus of North Carolina State University on June 5. That’s not all; the paper has been accepted even by the widely read science magazine Astrophysical Journal.

There Will Be No Winner As Social Media Continues To Shape The Reputations Of...