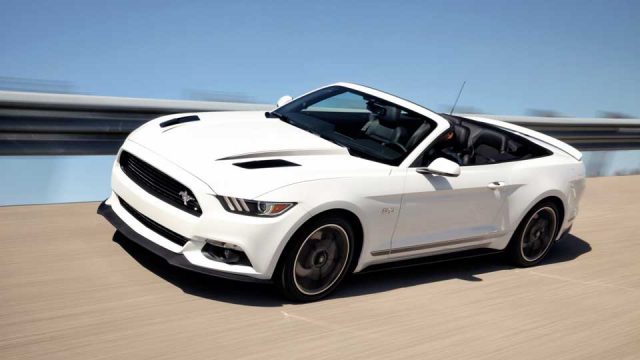 Ford has been making a steady push throughout the last couple years to return the Mustang to its former glory. This comes after several decades of what many felt like was neglect with a name in the automotive world, which simply shouldn’t have ever become neglected. That being said, Ford believes that they have the answers now, and these answers will begin to go a long way to repairing the overall image of the Mustang, which has grown a lot softer than it ever was before.

The first major visual update to the 2016 Ford Mustang is the hood vent turn signals, which originally appeared in 1967. This update is something that gives a lot of styling to the front of the vehicle, specifically into the grill area, which has appeared to become neglected over the last several years. This years’ Mustang will also be bringing the single-stripe over the top of the vehicle. This is something that in terms of styling was severely missed and desired by those who are enthusiasts of Ford’s classic sports cars.

The base model Mustang will boast a 310-hp EcoBoost engine. The GT will come with a 450-hp engine, giving the GT a little extra power. That being said though, the base model Mustang is a return to the glory that Ford once had under its belt. Ford has also loaded up in terms of the number of wheel package options, giving buyers endless numbers of choices. All of this being said though, the major takeaway from Ford’s efforts to make the Mustang one of the best muscle cars on the planet again starts with their efforts under the hood.

They’re putting together a product that will be thoroughly enjoyed by new Ford enthusiasts, as well as those who loved Ford 30-40 years ago. Ultimately, this opens the door for Ford to start paving the way and competing better with Chevrolet and Dodge, who have both reclaimed their former glory with muscle cars that deliver with style and performance. It’s clear that the best is yet to come for Ford though, who is continuing to push the envelope in terms of what they are delivering to their customers with the Mustang.

Melanie Banker, Mustang marketing manager pointed out that, “Mustang enthusiasts are not shy about telling us what they want, and we’re constantly exploring ideas together with our engineering team to develop new features we know our customers will love. These new hood vent indicators for the GT model are a perfect example of us communicating customer feedback to Mustang engineers and the team responding with an exclusive new feature for owners of the 2016 Mustang GT.”

At the end of the day, it comes down to delivering the things that customers want in their Mustangs and understanding how those customers are changing. Throughout the last several decades, Mustang enthusiasts have evolved a great deal, and they face new challenges, and have new desires when it comes to what they want out of their muscle cars. This latest Mustang is a great example of what customers have said they want.