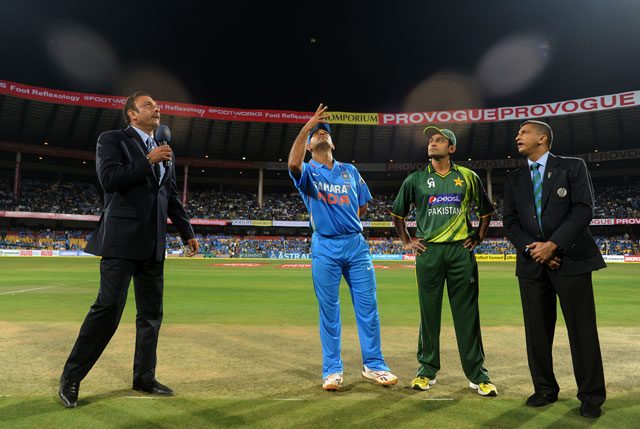 Arch-rivals India and Pakistan clash in the Super Ten Match of the World Cup T20 on March 19, 2016. The match will be played at Eden Gardens at 07.30 PM IST.

India who was thrashed by New Zealand in their first match will be trying hard to bounce back to keep their chances alive in this tournament.

Last time, India and Pakistan played each other in the recently concluded Asia Cup. India defeated Pakistan in that match, but the Men In Green put up a decent show; thanks to the dream spell delivered by Mohammed Amir.

Pakistan, after a disastrous Asia Cup is back in form, as they defeated Bangladesh in their first match.

The match witnessed Shahid Afridi‘s return to form, and he did some magic both with the ball and the bat. If Afridi finds the top gear in this match as well, then things will not be that easy for the hosts.

The match can be watched live in Star Sports in India and PTV Sports in Pakistan.

Internet users can watch the match online by visiting the official website of Star Sports here..

After the match against New Zealand, Indian Skipper Mahendra Singh Dhoni has blamed irresponsibility of batsmen for their defeat.

The words of captain will surely struck their ears, and they will try to proclaim their mettle in the pitch with style. In their next match India will clash with Bangladesh on March 23.

The match in Eden Gardens will be conducted with high security. More than 4000 security personals have been deployed in the ground, and the whole Kolkata is under security surveillance.

Pitch in this ground is expected to be spin friendly, and this gives Pakistan an upper hand, as they have Shahid Afridi who can bowl four quality overs in a highly economical manner.

Unlike other times, Indian bowling attack is also dangerous as it has Jasprit Bumrah, Hardik Pandya and the veteran Ashish Nehra.

These pacers are in the peak of their form, and if Ashwin too succeeds in finding the rhythm, then things will be hard for Pakistan.

Toss has crucial role in this match, as the team who bats second will be facing difficulties due to mist in the ground.

In all probabilities, the first innings score will exceed 160, and audiences can expect a run feast in this match.

The One Stop Fantasy Sport Platform

This is how Technology is making Sports fairer