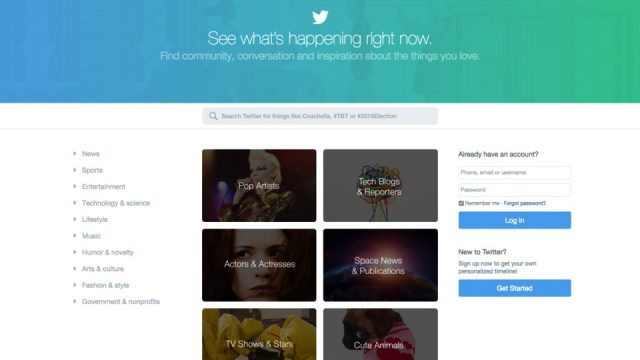 Twitter has introduced a new homepage for non-users in an effort to streamline what the social network has to offer. While users won’t see any changes in the interface, those who don’t have an account, or simply haven’t signed in, will have a chance to spread their wings and surf around the network minimally before they’re ultimately forced to make an account. This is an impressive change because Twitter has been battling an identity challenge, and fighting an uphill battle when it comes to getting new users to become active.

Essentially the consensus has been that it takes too long to get acclimated to the network, and that ultimately users are left guessing for long periods of time before they become fully-dedicated users – if they ever do at all. Many have pointed out that this doesn’t do a lot to correct that, but at the end of the day – there is only so much that can be done to actually change the way people interact with a social network like that. Twitter is something that many users, even the most dedicated today, had serious issues acclimating to earlier in its life.

The new layout gives the potential users a brief tour of the site. It allows them to search through pre-sorted tiles that behold pieces of information that users can ultimately work through. That being said, it offers a glimpse, but leaves the user with the same problem when they actually get into the network. Instead of giving them the tools, or an example of how the site functions in the “live preview” this update really just shows the top performers from each category – whether that’s news, humor, music, or any of the other options.

Twitter also doesn’t deal with the outstanding issue regarding the interface of the rest of the network. While the new homepage has a very distinct look – the rest of the network has almost a completely different feel. The fact that Twitter launched this separate of any changes to the interface of what users experience, causes a big gap that isn’t going to help on-board those potential new users. These issues are some that really are going to challenge the company as they move forward and try to develop better tactics for drawing new users in.

Elon Musk Is Named Person of the Year. Why Time Chose the EV and...

How Elon Musk Winged It With Twitter, and Everything Else – The New York...

Elon Musk says he doesn't own a house and for the most part sleeps...

The political environment is terrible for Democrats — and it may get worse –...

Johnny Depp and Amber Heard’s Libel Court Battle: Everything to Know – Us Weekly