A study published in the open access journal Science Advances on Friday, July 17 is saying that microscopic phytoplankton is responsible for brightening up the sky on cloudy days. The said study primarily focuses on the significant role these microbes play in cloud formation in the Southern Ocean.

The researchers have written that the microscopic organisms can be swept away from their aquatic homes by gusty winds. According to them, once these tiny critters become airborne, they promote water condensation, which eventually results in formation of bright clouds. These bright clouds possess the ability to reflect additional sunlight.

University of Washington’s Daniel McCoy, one of the coauthors of the study, informed that he and his colleagues have found that clouds gathering over the Southern Ocean tend to reflect much more sunlight during the summer months than they would have done without these massive plankton blooms. He added that the summertime sees the concentration of cloud droplets becoming two times of what it would have been if the ocean was biologically dead.

It has long been established that phytoplankton is one of the most essential components for managing the climate of our planet. It absorbs huge amount of carbon dioxide every year for photosynthesis. The points put forward by this new study show that phytoplankton contributes to our planet in another big way i.e. by making it slightly brighter.

The researchers are claiming that each year, on an average, phytoplankton reflects 4 watts of additional incoming solar radiation in every square meter of the Southern Ocean sky. 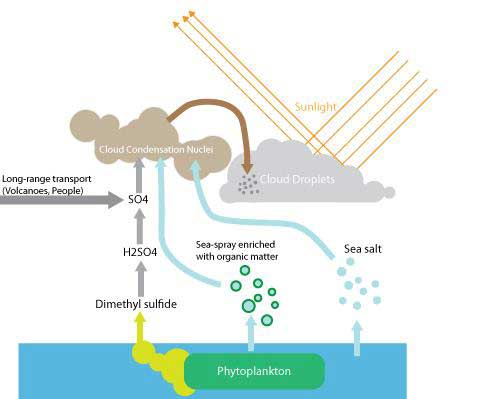 The researchers came to know about these cloud-forming microscopic organisms somewhat by accident. They stumbled upon them when checking cloud cover data gathered by NASA’s MODIS satellite. When looking at the data, researchers found that the clouds on the Southern Ocean sky were reflecting significantly more sunlight during the summer months.

Clouds are formed when water droplets condense out of the air surrounding tiny particles such as dust, salt, dead organic matters, and at times living organisms. Experts say that the size of particles decide the kind of brightness a cloud will have.

Smaller particles result in formation of smaller droplets, which ensures that the cloud has bigger space for reflecting back the incoming rays of the run. This in turn ensures that the surface of the planet remains cool. The findings of the new study are indicating that microscopic phytoplankton is doing the same job effectively.