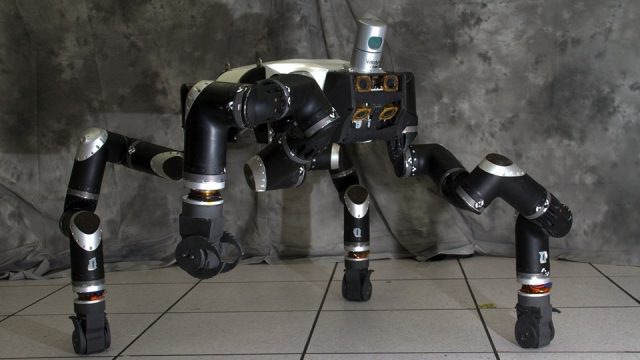 The coming weekend, will see roboticists from different corners of the globe gather in Pomona, CA for taking part in this year’s DARPA Robotics Challenge. The winner of the challenge will be awarded a sum of $1 million along with exclusive bragging rights. However, finding the best roboticist is not the only goal of the event; this robotic challenge is organized primarily to trigger further advancements in the world of robotics and encourage development of systems that can help humans to cope more easily with disasters.

Every year DARPA gets participants from different parts of the world. However, one of the most prominent entrants in the event i.e. NASA’s Jet propulsion Laboratory doesn’t need to leave the state to take part in the challenge. Researchers at the Altadena, CA-based NASA lab is currently busy preparing a disaster robot called RoboSimian. The robot has been named so due to its resemblance with chimpanzees; the dexterous limbs of these apes have inspired NASA’s robotic experts to design this device. Here, it must be mentioned that the term “simian” means old world monkeys and apes.

RoboSimian is an ape-like robot, which moves on four limbs. This feature of the new NASA robot allows it to travel easily over most complicated terrains and climb objects seamlessly. The NASA robotic experts have designed this ape-like robot as a position agnostic entity; it is equally effective when working backwards or forward, upside down or right side up. The device doesn’t have any head, but has 7 sets of eyes that are scattered all through its body.

RoboSimian will need to perform jobs like driving cars, blocking doorways, opening valves, negotiating debris, cutting holes in the wall and so on. In addition, it would require the user to have command of a 3-D environment.

NASA engineers have given the robot the ability of anchoring itself on one hand for improving its stability when climbing into the car it will have to drive. The robot will also be able to turn itself off and remain in its position when in a hairy situation; this would help it to avoid getting unstable. Operators, on the other hand, will get a chance of assessing the issue without much difficulty and make plans for the next move.

How to watch Charlotte FC vs Chelsea on TV: Live stream channel, schedule and...

What are the side effects of the Monkeypox vaccine? – NationalWorld