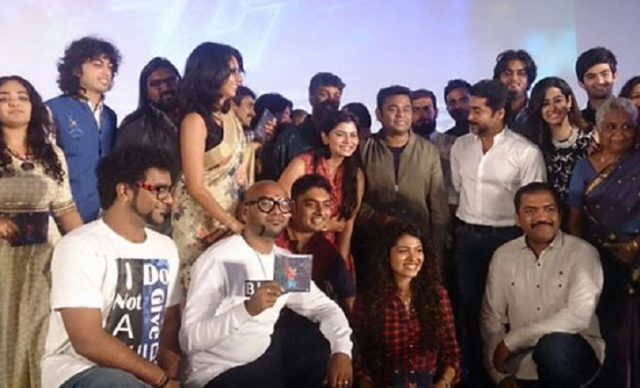 Suriya, the stylish star in Tamil Cinema is now awaiting the release of his new movie “24″ which is being directed by Vikram Kumar. The film is expected to hit the screens this month, and prior to that, makers have now unveiled the audio of the flick on April 10, 2016.

A R Rahman who composed the music of the film conducted live performances during the grand event in front of some eminent personalities of South Indian Industry.

Suriya’s father Sivakumar and brother Karthi delivered speeches during the ceremony. Sivakumar told that Suriya has emerged as a great actor. Karthi revealed the official trailer of the film, and then Suriya came up to the stage and delivered an awesome speech.

Suriya told that “24” is a brilliant film crafted by Vikram Kumar. He asked audiences to watch the film in theaters if it is good. The actor told that bad films does not deserve to be success at the Box Office, and there is no need to watch them even if it is his flick.

During the speech, Suriya also gave a powerful advice to students. Earlier, it was reported that 20 students have committed suicide following their exams. Suriya asked youngsters not to do such steps; no matter whatever happens in their life.

Vikram Kumar’s previous movie ‘Yaavarum Nalam’ was a Box Office success, and the director aims to deliver a mammoth blockbuster through “24”. This new movie is expected to be a high-voltage thriller in the backdrop of a Time Machine. The first look teaser of the film was well received among audiences and it features Suriya in three different get ups.

Samantha Ruth Prabhu and Nithya Menon have done the roles of heroines in the flick. “24” will lock horns with Ilayathalapathy Vijay’s “Theri” in the Box Office. We should wait and see to know about the ultimate winner in this race.