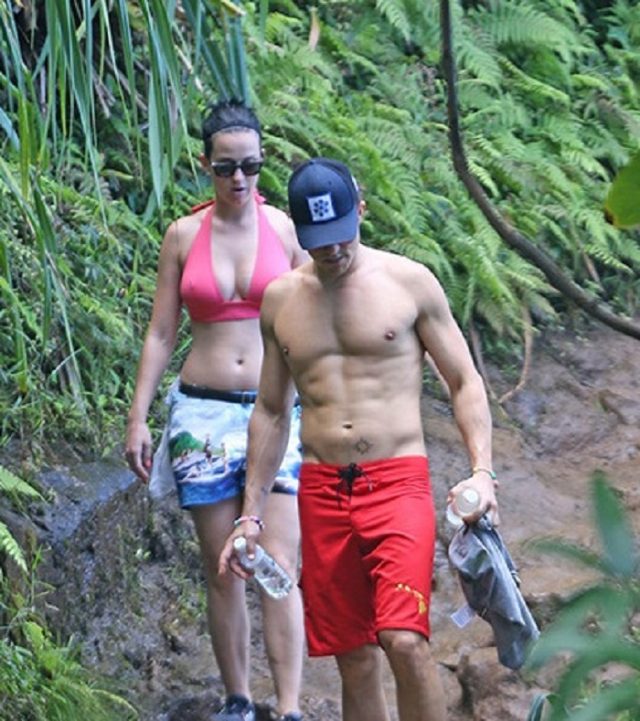 Katy Perry and Orlando Bloom have been snapped enjoying a romantic holiday together. The British star of Lord of the Rings and pop princess were seen in Hawaii holding hands while out walking together.

It’s been reported that the pair has been romantically attached since being spotted together at the Golden Globe Awards earlier this year.

Perry, 31, was previously married to British actor and comedian Russell Brand. Bloom, 39, is also British and has starred in many huge Hollywood hits, including the Pirates of the Caribbean franchise, and Elizabethtown.

The photos which have aroused such interest were taken in Kauai sometime last week. Bloom can be seen topless, and is holding hands with Perry, who’s wearing a bikini top. It’s reported at the time they were out enjoying the island on a walk.

Other pictures reveal the pair on a casual night out, again showing a closeness and affection usually reserved for couples.

Entertainment Times reports that Bloom joined Perry in Maui after the pop starlet played a private gig at the Grand Wailea Resort on February 24th. During their holiday, it’s reported they’ve been enjoying helicopter rides, hiking, and eating out at the local restaurants.

The pair’s closeness was first pictured at the Golden Globes afterparty, hosted by The Weinstein Company. There they spent a lot of time talking and got close to each other.

The Daily Mail reports they were seen leaving the post-awards party together, accompanied by a small entourage including security guards.

Perry was married to British stand-up Russell Brand until 2012 and was recently reported to be in a tumultuous relationship with John Mayer, the American singer-songwriter. During 2015, the couple were said to have split up twice.

Bloom split from his wife, Australian model Miranda Kerr in 2013. There were rumours he was secretly dating model Kendall Jenner last year, but the actor told media he didn’t know her at last year’s BAFTA Britannia Awards.