Samsung unveiled the Galaxy Note 4 last September, to the amazement of fans who longed for the more premium feel provided by the aluminum metal band – as opposed to the more plastic feel on the back cover of the Galaxy Note 3. While both the Note 4 and the Galaxy S6 are two different devices for two different types of consumers, some individuals constantly debate the two device models each year when it comes to whether or not they will upgrade to a newer device.

We want to take the time here to show the most important differences between the Galaxy Note 4 and the Galaxy S6. While we still can’t make the decision for you, we can help cut through the “murky waters” of the decision-making process.

In 2014, Samsung updated the build quality in the Galaxy S5 with a dimpled texture on its back cover instead of a plastic leather cover like the Note 3, but switched things up to an aluminum metal band in the Galaxy Note 4. Some analysts didn’t necessarily like Samsung’s continued use of plastic on the Note 4, but they did believe that the use of an aluminum metal band gave the Note 4 a more premium feel than before. At the same time, however, metal does become susceptible to bending: just ask Apple about the iPhone 6 Plus, whose #bendgate scandal has become an irremovable part of 2014 social media. 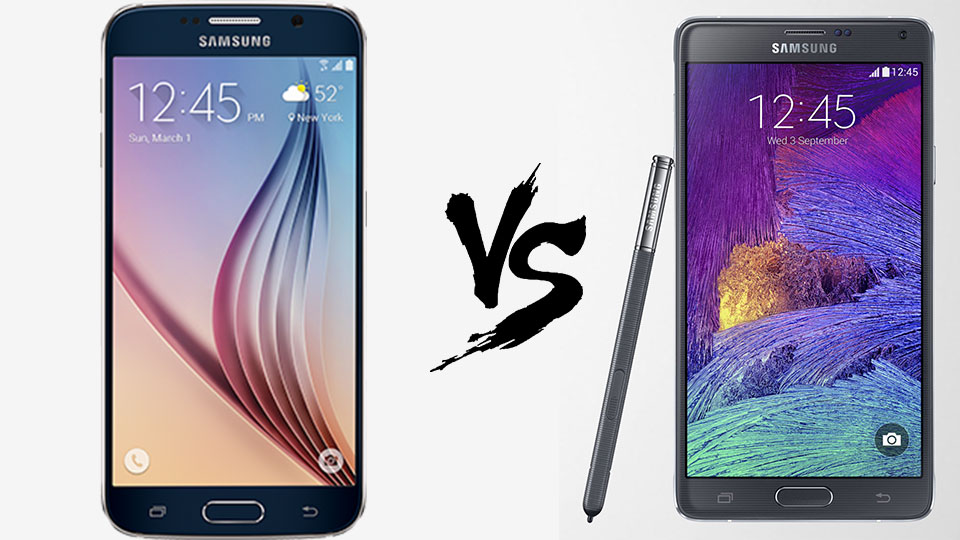 The Galaxy S6’s metal casing is not just any aluminum casing; instead, it is made of aluminum 6013, the same metal that is used to build airplanes. This means that the “airplane metal” used to build the Galaxy S6 is 50% stronger than traditional metal.

Samsung’s taken a bold stance with the Galaxy S6’s Gorilla Glass 4 that wraps around the front and back of the device. Just how durable is the Gorilla Glass 4 display? We don’t want you to drop the device on concrete in order to find out.

This means that you won’t have the long-held luxury of expandable storage but, if you never used it in the first place, you won’t notice the difference. On the other hand, photographers and videographers who’ve enjoyed the no-limits build philosophy of the Galaxy Note 4 will have to compromise expandable memory storage for a device that looks every bit as premium as it costs.

The result of a closed back via metal and Gorilla Glass casing is that the battery is no longer removable.

Removable batteries have been a win for Samsung customers with the Galaxy Note 4, since you could replace any defective or bad battery with a new one. The long-held convenience of the removable battery was that you “could go from 0 to 100% in seconds” by taking one battery out and putting in a new one.

With the Galaxy S6, removable batteries are no more. What this means is that, should something go wrong with your device, you’ll now have to rely on a good phone insurance plan to replace your battery if you don’t do try a DIY project – which, if it goes wrong, will only void whatever warranty you have purchased on the device.

With the loss of the removable battery in the Galaxy S6, you’ll now have to send your device in to either 1) the carrier or 2) the manufacturer if something goes wrong. A number of iPhone users switched to Samsung for this reason, but it seems as if Samsung’s new aesthetic changes leave the company open to criticism. Some individuals have voiced online that what made them buy Samsung was the fact that the Korean manufacturer was “different from Apple.” “Now, you’re just the same,” a number of online commenters have said about Samsung.

The Galaxy Note 4 features Samsung’s usual TouchWiz build, but the Note 4 shows Samsung’s considerable improvement in the TouchWiz area, as opposed to the Note 3, for example. Samsung’s always been one to provide its own S-Voice app (alternate to Google’s Google Now voice command), its own email app (as opposed to Gmail), and others.

With the Galaxy S6, Samsung has trimmed TouchWiz even further by reducing the UI up to 40% and providing the apps it trimmed in the Galaxy Apps store for those who still want to download Samsung’s own Google-alternative apps. Some Samsung fans appreciated the new and de-bloated TouchWiz, but some consumers can’t wait to start downloading Samsung’s old apps as soon as they get their device up and running.

The Galaxy Note 4 was a continuation of Samsung’s commitment to “bigger and better” with battery life. The Note 3 featured a 3,200mAh battery, and Samsung increased the battery size slightly in the Note 4 (3,220mAh), with some added optimizations that would improve battery life from the Note 3 experience.

It’s usually the case that higher-resolution displays can drain battery life, so the verdict is still out for the Galaxy S6. Samsung’s optimizations should help in this regard, but early tech reviews claim that the GS6’s battery life takes something of a nosedive in the battery department compared to the Galaxy Note 4.

The Galaxy Note 4 features a 16MP back camera that utilizes Sony’s Exmor camera sensor, which departs from the use of the ISOCELL camera tech that Samsung used for its Galaxy S5. The Note 4 is the first Samsung smartphone in the Galaxy line to also feature optical image stabilization (or OIS), which prevents motion blur in photos and constant hand shaking that impacts them.

The Galaxy S6 camera utilizes Sony’s Exmor camera sensor (the same as that of the Note 4), and also features OIS – the first for a Galaxy S device. Where Samsung’s Galaxy S6 differs from the Note 4 in the camera is that first, the S6’s front-facing camera is a 5MP, as opposed to a 3.7MP, camera. As for camera apertures, the Galaxy S6 features f/1.9 apertures for both front and back cameras whereas the Galaxy Note 4 featured an f/1.9 aperture for its 3.7MP front camera but an f/2.2 aperture for its 16MP main camera. The result of Samsung’s improvements in camera aperture is that both cameras now let in more light, producing more natural lighting in photos. The end result is that lighting and photo backgrounds appear more natural and life-like.

These 6 differences have been provided to help you ponder the decision to upgrade your device from a Galaxy Note 4 to a Galaxy S6. If you value design and glamour, the Galaxy S6 is your best bet. If you value utility over form and design, then the Galaxy Note 4’s microSD card slot and removable battery will prove to be features you can’t live without.