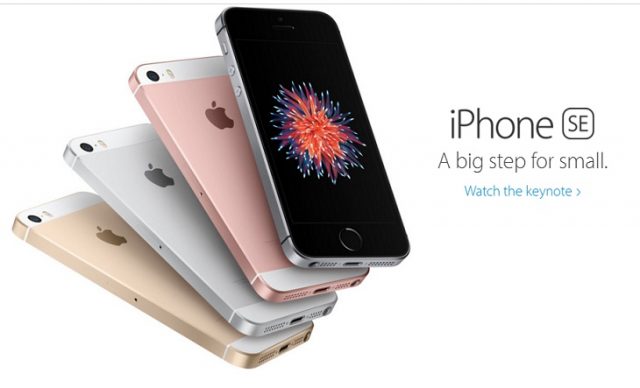 Apple has officially launched its Apple iPhone SE, 9.7-inch iPad Pro in India and is available for immediate pickup. Both iPhone SE and 9.7 inches iPad Pro were released on 7 April 2016 .

It seems that Apple is trying to induce sales by lowering its gross margin. It is also counting on its consumers upgrading to the more profitable 64GB SE model.

The iPhone SE has a starting price tag of Rs 39,000 for the 32 GB storage variant while the 64 GB version costs Rs 49000. The 4-inch Smartphone can be purchased both online and offline at Apple’s retail partners.

Check the complete features on the official website here.

The iPhone SE is a rehashed version of the smaller 4 inch iPhone 5S. Better still it could be dubbed as an Apple iPhone 6s in the skin of an Apple iPhone 5s. The smartphone boasts a 4 inch Retina Display and runs on a powerful A9 chip.

The iPhone SE represents a smart move by the Cupertino-based electronics giant and is expected to be available in 110 markets by May 2016.Apple has dubbed its iPhone SE the “most powerful 4-inch smartphone”.

The device has features which could make it envy for its competitors. It supports and Apple Pay contactless payment option. It boasts a 12MP iSight camera which is also featured in the iPhone 6s and iPhone 6s Plus. The device is available in ‘Silver, Gold, Space Gray, and Rose Gold’ colour option.

The iPad Pro boasts a 9.7 inch Retina display which Apple says is better than the original iPad Pro. The device features the True Tone display and runs on the iOS 9.3 platform. The device runs on an Apple A9X chip. It is also capable of editing 4K videos on iMovie. It also features the Apple Pencil and Smart Keyboard.